Log in with Facebook
or
Wrong email address or username
Sign up
Already on BookLikes? Log in!
Incorrect verification code
Please, check your email, the code to access your BookLikes blog was sent to you already.
Enter code:
« Back Send
back to top
Search tags: highlander-scot 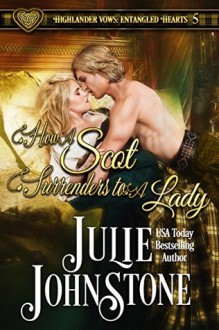 'How a Scot Surrenders to a Lady' by Julie Johnstone is Book Five in Highlander Vows: Entangled Hearts Series. This is the story of Cameron MacLeod and Sorcha Stewart. I have read some of the previous book but I do feel this can be a standalone book. Cameron is the youngest of his brothers and seems to have something to prove to them.
Sorcha and her twin brother Finn are very different in that Sorcha is more the warrior and Finn is more of the softer of the two. Their Father, Earl of Angus is very harsh and Sorcha and her mother used to buffer between the father and the son. But their Mother has died and now Socha is trying to keep protect her brother. Their father already married of their sister to a harsh man who just wanted a wife for children. Now their father is trying to make Finn into a Warrior by making him kill King Davids' Mistress, Katherine Mortimer. When he fails to do the job a fellow warrior named Hugo said he will do it if he can have Sorcha's hand in marriage. Sorcha knows that she should have left her father instead of staying with his threats to marry her off but she feels she needs to stay and protect Finn and their Uncle Brom, who is large as a warrior but has a mind of a child. But with this threat of killing the Kings Mistress to start the downfall of the King and knowing this will hurt Finn in the long run Sorcha goes to warn the Kings Mistress and their group.
Cameron is leading the group guarding the King's mistress and they are attacked he happens to see Sorcha.
Sorcha and Cameron actually met a few years back briefly when they was a Tournament going on that they both competed in. Although Sorcha was dress as a boy since women can't compete he saw her and tried to talk to her. But was stopped when she ran off and a Seer stopped him to tell him it wasn't his time to meet her. That she, Sorcha and him would meet again and she would bring him to betray his family and the King.
Now has come the time for them to meet and be together but Sorcha has hit her head and doesn't know anything it seems and Cameron is trying to stay strong and not fall as the Seer said he would.
This book you will not be able to put down...so be prepare to enjoy a few hours of reading!
"My honest review is for a special copy I voluntarily read."
https://www.amazon.com/gp/profile/A2HX0B5ELOPP5Z?ie=UTF8&ref_=sv_ys_3
https://www.goodreads.com/user/show/1831318-sissy-s-romance-book-review-for-you
https://twitter.com/soapsrus68
https://www.facebook.com/RomanceBookReview
http://sissymaereads.blogspot.com/
http://booklikes.com/blog
https://romancebookreviewforyou.wordpress.com/
https://www.tumblr.com/blog/romancebookreviewforyoublog
https://plus.google.com/+SissyHicks 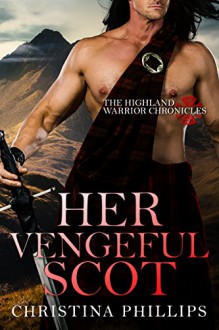 I just finished book 2 of Christina Phillips’s fabulous The Highland Warrior Chronicles, Her Vengeful Scot. Have to admit I’m loving this series a LOT. This book also had its share of drama and intrigue, much like book 1. The stories are well-written and, as far as I could tell, well-researched too.

The Highland Warrior Chronicles is set during the time of Kenneth MacAlpin, arguably the first king of the Scots, around 843. He makes his appearance in both books, though less in book 2 than book 1. He wasn’t really someone I cared much about. You’ll find out the reasons in my review. He was also the king of now extinct Pictland. The author’s website has a short intro about the Picts and Pictland which I found fascinating.

Book 1, Her Savage Scot, takes place a few months prior to book 2. Connor and his men travelled to the Kingdom of Ce, a segment of the Pictland, with a proposal for the King of Ce from his own King Kenneth MacAlpin. Recently, MacAlpin , the King of Dal Riada has had this notion that he should be the reigning king of Pictland seeing his mother was a Princess. The Royal Lineage, in the case of the Picts, comes via the mother and not the father, so MacAlpin was determined to grab what he deemed was his. The kingdom of Ce, Circinn and the others were being ravaged by the Vikings. MacAlpin asks that the eldest Princess of Ce be married to one of his warriors with Royal blood, in this case Connor’s elder half-brother, Fergus. In return, he’s willing to be allied with the Picts and help them fight the Vikings. Quite a lucrative offer no doubt. Connor was tasked to make sure the elusive Princess and the King, with other nobles be brought back to Dal Riada to discuss everything. If all agrees, the marriage will take place posthaste. 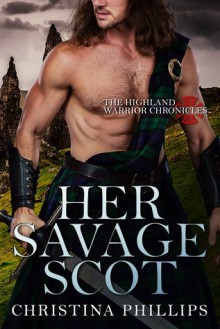 Her Savage Scot, book 1 of The Highland Warrior Chronicles, had been in my TBR for a while now. Recently, when I felt the urge to check out some medieval Scottish-Highlander romance, I thought why not?. This was my first novel by Christina Phillips and it definitely won’t be my last because I enjoyed the book more than I thought I would.

Her Savage Scot is set during the time of Kenneth MacAlpin, arguably the first king of the Scots, around 843. He makes his appearance here too, but not really as someone I cared much about. You’ll find out the reasons in my review. He was also the king of now extinct Pictland. The author’s website has a short intro about the Picts and Pictland which I found fascinating.

Princess Aila, the eldest daughter of the current King of one Pictish segment called Ce, is introduced almost at the beginning of the story. A widow since 17, Aila’s life had not been the same when her young husband Onuist died saving her life from the marauding Vikings. At least that’s how the story is told all around Ce, where Onuist is revered as a hero. Just as her maternal grandmother and maternal cousin Elise, Aila has the same power of seeing visions and sensitive towards a coming incident through their Goddess Bride’s blessings. However, on that fateful day, Bride didn’t come to her rescue or Onuist’s for that matter. Since then, Aila had decided to abandon Bride and embrace the ‘new’ religion AKA Christianity. She’s also become a recluse, so much so that people outside of her closest kin aren’t allowed to see her. She doesn’t go out much unless the very close circuit of the castle and she has no interest in being introduced to the strangers who come to visit Ce. Hence no one sees her in attendance of any feast or celebration. She’s become some sort of a myth. It’s been 9yrs. but she’s not going to forgive Bride for her betrayal. 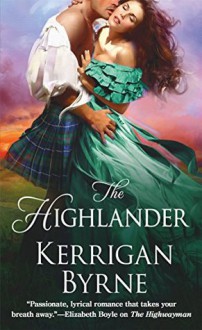 I’m really enjoying Kerrigan’s dark historical romance series, The Victorian Rebels, and The Highlander is the recently published third installment of the series. I was really anticipating it because I thought from the previous installments that the H and h of this series are going to be perfect for one-another. After reading the story, I’m not really sure my wish came true.

Note that Victorian Rebels has NO ties to any of the author’s previous series whatsoever. This series has no paranormal or time travel elements in it, just a few Victorian-era bad boys of the underworld getting their HEAs with women who bring them down to their knees, quite literally. More than once I’m happy to add. ;) These people are deadly and will do anything to survive. 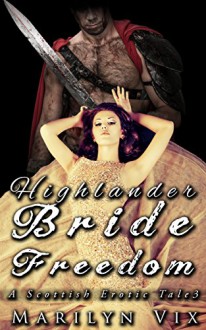 This is not a series... the whole 3 "parts" (including Highlander Bride Taken and Highlander Bride Seduction) read more like an excerpt of a novel, each containing 15 pages at max. The author writes well but misleading the readers for a series and pricing each at $2.99? Not recommended.

Plus, though I didn't mind much considering the situation, there is cheating in this story; a trope I, in general, despise. The h is married off to the old and doddering laird and continues to sleep with the H, who is the nephew, since the "wedding night". Theirs was a very unconvincing love at first sight. The author made no effort to make me believe in their so-called romance. A few shag here and there doesn't make me a believer, even for erotica.