Log in with Facebook
or
Wrong email address or username
Sign up
Already on BookLikes? Log in!
Incorrect verification code
Please, check your email, the code to access your BookLikes blog was sent to you already.
Enter code:
« Back Send
back to top
Search tags: kathy-acker 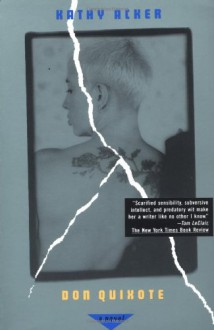 Kathy Acker's Don Quixote, which explores and pushes the boundaries of gender and sexual identity, certainly shocks the system, as Acker intends it to. This book is full of cuss words, "low-brow" language, and graphic, even crude, sexual encounters. Part of this seems to be purely for shock value; however, I understand that this almost violent assault of language also complements the content of this novel, which looks rather extensively at the connection between violence and sexuality.

I found the content of this novel highly engaging and really enjoyed the way that Acker takes some of the classic male-centric plots, such as Cervante's Don Quixote and Shaw's Pygmalion, and retells them from a gender-deconstructionalist view point. Though purposefully extreme, I found Acker's conversation with the literary tradition that preceded her exceptionally interesting, especially having read some of the original texts that she references, such as Pygmalion. This was probably one of my favourite elements of the novel.

In its telling, Don Quixote is very surreal, and it can be a little difficult to orient yourself while reading. The physical reality, though usually present in the novel, is not always clear, as Acker often goes into mock-academic, almost essay-like passages. A lot of the novel seems very in-the-mind, and sometimes it's unclear whether or not events are imagined or happening in the fictive present.

All this aside, the reading experience is, for the most part, pleasurable. And some of the passages are written with absolutely gorgeous language, for which I have a soft spot. Toward the end of the novel, I did begin to get a little tired of all the cuss words and graphic sexuality, but I think that this feeling is inevitable as Acker is consciously working to bring readers out of their comfort zones and works with some of the most taboo elements of society, such as abortion.

Overall, I think that this novel has its fine points and is definitely worth reading if you are interested in gender deconstruction, pro-sex feminism, and issues surrounding love and loneliness. I'm glad to have read it and can see myself reading it again in the future, if only to gain a greater grasp of the complex material. I have no way of giving this novel a star rating at this point, and would not recommend it to anyone who shies away from swearing and graphic sexuality in fiction, but suffice it to say that I found it a worth-while and informative read. 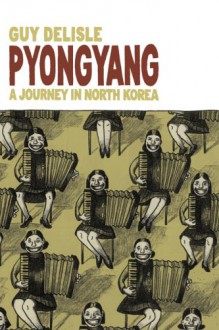 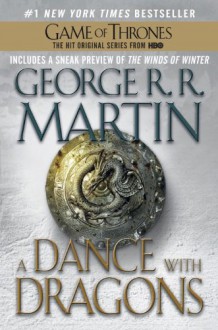 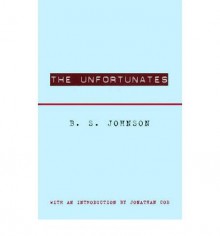 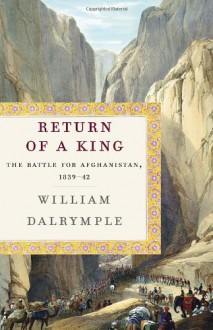 My required reading for school has been a lot heavier than I anticipated this month, so there are going to be a few changes to my January TBR. So far this month, I've read Pyongyang by Guy Delisle for my travel writing class, The Unfortunates by B.S. Johnson for my experimental fiction class, and A Dance with Dragons from my original TBR.

In the next week or so, I'll be reading Kathy Acker's Don Quixote for my experimental fiction class, and I hope finish J.R.R. Tolkien's The Return of the King as planned. The Hobbit, however, will have to be bumped to another month, probably February. 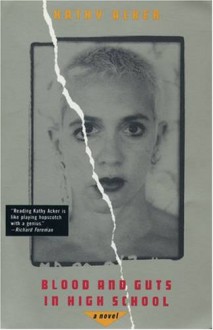 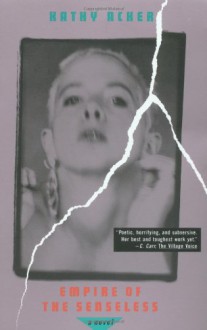 kathy acker is the vicious successor to william s. burroughs: twisted master of the cut-up technique, postmodern doyenne, a romantic and nihilistic and clear-eyed uber-feminist, punk dyke (kinda), giddy regurgitator of scifi/horror/erotica tropes, transgressive misanthrope, a sophisticated and shamelessly political word-terrorist disguised as a reductive, barbaric, apolitical anarchist. Empire of the Senseless is, in my opinion, her uneasy and imperfect masterwork. if you are no fan of hyper-aggressive language, atrocity, crudely violent and savagely sexual scenarios, and the complete breakdown of sentence structure and characterization... turn, turn away. but if the deconstruction of narrative and meaning is your thing, if crossing and warping boundaries and genres and 'normal' emotional states of mind are fun things for you, then this is your book, my unstable friend.

some postmodernism can be read and enjoyed almost as a quaint joke (i'm thinking of much of the po-mo of the 80s and 90s) while other examples of the style are seen as nearly unscalable mountains of challenging language, challenges most folks are disinterested in even attempting. acker's work falls squarely in the latter category. it is almost nonsensical to describe the narrative: two horrible but at times sympathetic, at times victimized protagonists murder and rape a bloody trail across a futuristic, william gibson-style europe, towards and away from each other, and beyond. this is a world where algerians finally rule france, a world where wars are fought with sound, a world where lovers long for each other's deaths as the most clear way to get in touch with their own yearning but empty cores. the book is not about the narrative itself: this is postmodernism after all. the book is about illustrating the Personal Made Political, it is about dismantling known systems and regenerating them, to form a structure that describes states of mind rather than actual states of being. it is the kind of novel that will detail violent subjugation and mutilation, and then will turn around and blithely include entire passages from Huckleberry Finn and Neuromancer, verbatim (and to much official controversy). it perverts both the signifier and the signified, the semio and the text(e). plus it has an almost-sweet and almost-hopeful ending. read at your own risk!

i went to college at uc san diego, a sunny and unremarkable place known at the time for its nice weather, easy-going atmosphere, marine biology programs, and free beer & live music during the weekly Friday Hump Day. when i heard that acker was going to be a visiting professor for a semester, i practically became unstable in my excitement - how was it possible that such a writer could suddenly be so accessible, in my placid and pleasant environment? i needed to be a part of that class! but i knew my chances were practically nil - i wouldn't even get on the waitlist, being only in my 3rd year. still, i showed up, and the class was jam-packed to bursting, as expected. acker did something unusual: she gave everyone a writing exercise on the spot, one where we detailed a recent dream, then gave us a half-hour to write it and turn it in. she said she would personally choose who would be in the class based on that writing sample. she told us that if chosen, we should also be prepared to read our tale aloud and be open to the responses of our peers.

so i did what i had to do: i lied. i quickly imagined the most fucked-up dream that i could think of: a sexy tale of me and my brother, sadist and masochist, lovers, serial killers in training, with a central scene in which my loving bro tied me up, covered me in glue, and then left me for dead... and thus opened my eyes to an exciting new world. needless to say, my dream-story was not a hit with the class after i read it to them a week later. they thought it was weird and disgusting; it was. but i could care less: it got me into the class! how could it not? i jerry-built it to her unspoken specifications, those that dominated her own writings: perverse sexuality, brutal violence, the destruction of various paradigms and the transforming of those paradigms into a new, more sinister and visceral kind of structure.

later, after kathy and i became more deeply acquainted, i admitted that i had made that first dream up, just to gain access to her class. and i didn't even have a brother! i remember her looking at me as if i had only now noticed that the sky was up and the earth was down. i forget exactly what she said, but it was something along the lines of No Shit, That Was Obvious - And Why Would I Care? that's when i truly understood what her writing was about, and it was not about reality nor even what we construed as our personal place in that reality. it is about what we then make of that reality! and how we can destroy and recreate it anew, over and over again - endeavors that are actually not in opposition, but should and do exist side-by-side.