Log in with Facebook
or
Wrong email address or username
Sign up
Already on BookLikes? Log in!
Incorrect verification code
Please, check your email, the code to access your BookLikes blog was sent to you already.
Enter code:
« Back Send
back to top
Search tags: nikolai-duology 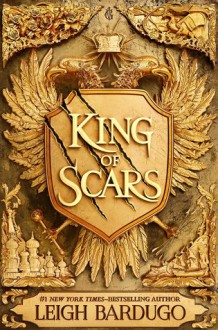 Nikolai Lantsov has always had a gift for the impossible. No one knows what he endured in his country’s bloody civil war—and he intends to keep it that way. Now, as enemies gather at his weakened borders, the young king must find a way to refill Ravka’s coffers, forge new alliances, and stop a rising threat to the once-great Grisha Army. Yet with every day a dark magic within him grows stronger, threatening to destroy all he has built. With the help of a young monk and a legendary Grisha Squaller, Nikolai will journey to the places in Ravka where the deepest magic survives to vanquish the terrible legacy inside him. He will risk everything to save his country and himself. But some secrets aren’t meant to stay buried—and some wounds aren’t meant to heal.

It has been almost a week since I finished this book and I’m still not over it. I loved this book, and everything about it. Once think I should say is that you should most definitely read at least The Bone and Shadow trilogy first, as well as the Six of Crows Books. Six of crows is maybe not necessary but will most definitely help to understand and know the characters. This books starts off a few months after the event in the last Bone and Shadow book, and a lot has happened since then. We see a mix of characters from Bone and Shadow as well Six of Crows. I thought it was a great blend of characters and they worked well together. The group is split into basically three mini groups and all work on different missions but the same goal, we again get multiple POVs which makes it so much more fun to read and follow our friends. The friendship and characters were always one of my favorite parts of the grisha-verse and that is not any different here. It is fast paced and we never get a minute if rest. The book is also chockfull of twist and turns. Overall, I think this book was my favorite book in the grisha-verse yet, even with that horrible, horrible cliffhanger. I rate it full 5★ and can’t wait for the next book to be released.

Nikolai Lantsov has always had a gift for the impossible.  No one knows what he endured in his country’s bloody civil war—and he intends to keep it that way.  Now, as enemies gather at his weakened borders, the young king must find a way to refill Ravka’s coffers, forge new alliances, and stop a rising threat to the once-great Grisha Army.

Yet with every day a dark magic within him grows stronger, threatening to destroy all he has built.  With the help of a young monk and a legendary Grisha Squaller, Nikolai will journey to the places in Ravka where the deepest magic survives to vanquish the terrible legacy inside him.  He will risk everything to save his country and himself.  But some secrets aren’t meant to stay buried—and some wounds aren’t meant to heal.

It feels like it's been ages since I read the Grisha trilogy, and, as others might have pointed out, a reread of Bardugo's debut trilogy might have been beneficial.  I remember some details, but not others, and it might have been the reliance of back story knowledge that had me feeling like this book was a bit hard to get into in the beginning.  It probably also didn't help that there were a lot of POVs, even though we really just switched between three main ones--Nina, Nikolai, and Zoya.

And in truth, I feel like Bardugo handled the multiple POVs and the multiple story lines A LOT better in the Six of Crows duology (which had been known as The Dregs duology at some point, and is now going to get a third book apparently which has caused me to feel completely flustered, because that's all I can think of now, so the rest of this review is sort of a blur.)  The truth is, because of the connection between these two series, it was hard NOT to make those comparisons, which might have been a bit unfair to this book.  I found myself wondering if any of the other Dregs would make an appearance, and whenever Nina's POVs swung around, I wondered if she'd run into Inej or Kaz, or whether they'd suddenly pop up to help her with her missions... as awkwardly dropped as those instances would have been.

Because while this book COULD stand on its own in some ways, I feel like there were too many references to previous books that could cause fleeting moments of "I wonder what that was about?"

Back to this book...

As I had already mentioned, I had found the beginning a bit slow to get into--dragged a little bit, even.  And despite the fact that every tangent seems to have its significance, the book still feels like it tried to cram too much material into one book... and yet there were a lot of moments where I just wanted to get on with the story.

It's conflicting, because it's not like I didn't like this book.  In fact, I very much enjoyed it, because aside from the story's outline and presentation itself, Bardugo has a way with words and creation that really just draws you right in.  Bardugo's Grishaverse is a wonderfully crafted place, and I've always loved how intricate all the details of her world are presented, how you can pluck any character out of the world and there can be a whole story to tell.  Even background characters have their significance and aren't just there for filler.

King of Scars is a book I've been looking forward to ever since it's announcement because it boasts two characters I came to love from previous series.  While I was never in the Nikolai/Alina camp, I always found Nikolai charming and fun to follow as a side character to Alina's journey.  And while I had started off Six of Crows not quite feeling Nina as a character, I slowly grew to love her as the books progressed.  Finally, as mentioned already, I just love Bardugo's Grishaverse!

King of Scars ended up being enjoyable and entertaining, but maybe I was over-hyping myself, or I was just expecting so much more, but I couldn't seem to relate with any of the characters, or find myself caring a whole lot.  Nikolai doesn't come off as charming as I remember, even though an inkling of that charm kind of hung in the background.  Nina's story was a bit rocky to begin with, got a little bit better, but then I feel like it sort of lost direction at some point.

In contrast, I found that I DID really like Zoya and really appreciate the glimpse into her history.  I honestly don't remember much about Zoya from the Grisha trilogy, except as maybe the "mean girl" Alina had to steer clear of.  The focus on her as a main character made her so much more fleshed out; and maybe because I didn't have any strong feelings for or against her previously, it was easy to kind of accept her as a new character altogether.  But that doesn't mean that I really felt any strong feelings for or against her in this book either.  I liked her, but not in that "I've got a new favorite character" type of giddiness.

Anyway, in the end, the book DID suck me right in as all the conflicts started coming to a head.  I really like the new twist to Grisha powers and hope to see it expounded on in the next book.  I never really expected this book to be a romance, and just as well, the whispers of the romances were a bit lacking in chemistry, as well as in credibility--this is something else that I'm hoping will be developed a bit more if we're going to pursue this line.