Log in with Facebook
or
Wrong email address or username
Sign up
Already on BookLikes? Log in!
Incorrect verification code
Please, check your email, the code to access your BookLikes blog was sent to you already.
Enter code:
« Back Send
back to top
Search tags: open-relationship Easily the best and most intriguing mystery yet. But damn...my heart is getting a workout here. 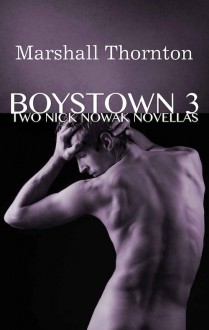 My heart...my heart. I’m not sure I expected the emotional gut punch hidden amongst these mysteries. Gaaahhh. My heart breaks for these men especially during this time of discovery. Hi.  My name is Cass and I am a 28 year old chef living in the London area.  I thought since my POV in this book was rather lacking I would take a moment to tell you a little about me, and how Jake, Tom and I came together. Yes this could get a little spoilery but hey…you don’t hear from me until the end of this book so really…my feelings on the matter seem to be irrelevant.

I run and own 6 restaurants with my business partner and soul mate Tom.  We have been together 9 years. As Tom likes to say…”we live together, own a business together, and we’re totally committed to each other.”  And yes, I suppose that is pretty accurate.  I grew up with my Nana Dolly and my mother who disappeared when I was 15.  We have always assumed she met her untimely end from a trick that went bad…yeah she was a prostitute so it was risky...but to this day we still don’t fully know what happened to her.  Her departure from my life left me feeling empty. I stole cars, got into drugs and spent a year in prison prior to meeting Tom. I have no idea how I met Tom, how I learned to become such an amazing chef or what made us fall in such love with each other.  But I could not live without him.

Since day one, we have known we were meant to be together, and yet there was always something missing. For one thing, I like to top sometimes and Tom…well...he doesn’t bottom...like ever.  So yes, we fuck around.  But we are always open and honest with each other…telling each other everything.  I am really not sure what Tom doesn’t get from me that he needs someone else, but he still enjoys our “open relationship”.  We are committed and love each other…so it is OK.  There are times we don’t see each other for weeks.  Work keeps us busy and it’s easier to stay closer to work instead of making the trek home to be with each other.  Even still, we manage to find the time to pick up someone else to fill our sexual needs.

There are times Tom makes me feel like shit.  He can be condescending and self-absorbed and his words hurt. I find myself flinching at times like I have been slapped. But I love him. And I would do anything for him.

It was not until I walked in to find Tom’s new lover, Jake, alone in my bed after his first time with Tom. I knew something was different. As far as I know, Tom doesn’t usually leave a nobody in our apartment alone so this guy meant something.  After a few weeks, I could tell Tom was consumed with thoughts of Jake.  Tom acted different and seemed happier yet conflicted.  So I wanted to see who this person was that was filling this void in my Tom.

But…Jake was amazing. I fell for him myself and wished I had found him first.  Jake has Tourette’s Syndrome and while it makes him wild at times, I was drawn to him, so curious about this man. I could tell Tom chose to just ignore Jake’s tics but I was fascinated and wanted to know more.  From that first meeting I could tell Jake was uncomfortable being around me…he didn’t understand the open relationship Tom and I had but I could also tell he was comfortable with Tom and wanted him.  I told Tom that Jake was exactly what he needed and Jake needed Tom.

“You always know when someone needs your help.  You’ve got a sixth sense or something. The fact that he’s hot is a bonus. Find him. Fuck him. Fix him.  It’s what you do.”

Meanwhile, I started texting Jake.  I needed to be sure Jake knew he was right for my Tom and I needed to know this man more as well.  Sounds fucked up and yes for many I guess it is.  But, I mean, even though I bug the shit out of Tom and he says stuff that is hurtful to me and I end up pushing him away, I know he is a good man.  Everyone says so.  And he loves me.  He tells me so and I can see it in his eyes.  But Tom needed Jake.  And I loved my exchanges with Jake too and I could tell we were growing closer. Jake saw things in me that Tom just didn't.  Tom found out and was not too happy (at first)…I guess we do keep secrets sometimes.  But I told him “I wanted to get to know him better.  You can’t give him up, so I figured we should at least be friends.”

And friends we became.  Jake eventually moved in with us.  We both fell in love with him, but Tom would not fuck me in front of Jake…and I only wanted to watch them together.

“Since Christmas they’d we’d fucked a lot, sometimes with Cass me present, sometimes without. Truth be told, Jake preferred it when Cass I was there, kissing him and whispering dirty things in his ear, and he’d have liked it even more if Cass I joined in. Not that he Jake was going to complain about Tom fucking him every night, Cass me watching or not. Hell no. Though he did wonder when Tom and Cass I found the time to love on each other, because if they we were doing it, they we weren’t doing it in front of him.”

And Jake was right.  We weren’t.  I mean who has the time? I work all the time and honestly prefer to just sleep at the restaurant than make the commute home.  Plus Jake could handle everything. At 24, the guy could do it all.  He single handedly is starting this new restaurant for us, designed and drew the construction documents…

(this is my friend Julie…as an Architect, this kind of shit drives her bat shit crazy)

…is overseeing all the renovations, designing the company’s website and growing our social media presence all while being the best power bottom we have ever met.  Yes, he can do it all…and I don’t even think the guy went to college!

It took nearly 9 months after we started living together for us to come together and bond as three in the way we had always needed.

All this time later and it is still so hard for me to believe there was never any jealousy between us.  We knew it was right all along.

“Cass I had felt no jealousy when he’d I’d discovered Jake in their our bed, the sheets rumpled with sex and sleep. No, he’d I'd only felt hope . . . hope that Tom would finally get the life he deserved, a life where his lover didn’t beat him back and shut him out. A life that made his smile reach his eyes every bloody time.”

And my friend, Julie, wants to thank Marco for this fantastic BR.  I cannot imagine them making it through our story without each other.  I am sure I have missed so many moving moments in our journey to find happiness but I bet Marco covers those even better than I could.  ;) I think I have a huge ass crush on Randy...just sayin'...

Yep...this character, once again, stole the show.  While this is a wedding story, it is the interactions with Randy that fueled this shortie amazingly well for me.

The introduction of Keith into the fold I enjoyed for only a brief period...more again from Randy's interaction than the others. I want these three men together and only them. *pouts a bit*

For me the last scene of this short was probably one of my favorite moments so far in this series, as "the game" between them took a pause.

"You can't use your safe word when it isn't a game."

I only wish this was meant to be for the three of them, and yet it isn't which honestly makes me really sad.

For me, Mitch and Sam's personal relationship seemed lacking here and I honestly was hoping for interaction between Em and Sam at the reception and yet she disappeared from the story completely.