Log in with Facebook
or
Wrong email address or username
Sign up
Already on BookLikes? Log in!
Incorrect verification code
Please, check your email, the code to access your BookLikes blog was sent to you already.
Enter code:
« Back Send
back to top
Search tags: outcast-season 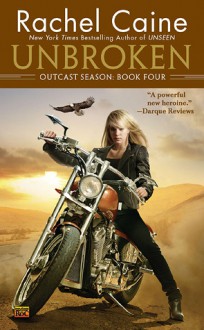 When certain series come to an end, they leave their readers unsatisfied or even disappointed. I feared it would be so with this one for several reasons. One, these books are actually a spin-off of the Weather Wardens series. I loved reading about Jo’s adventures and constantly going up against foes way bigger than she was and coming out bruised and beaten but a victor. Would I even like someone else playing the main part within the same universe? I hated her at first just as I was meant to. She was cold and inhuman. But good things or rather very bad things happened to her to change that.

Except for her love interest, David, we are taught to fear the Djinns in the prequel series. That brings me to the next reason for my misgivings: the protagonist in this one used to be a Djinn but was punished by the head honcho of Djinns when he turned her into a human before exiling her. But, the author takes three books to humanize the heroine’s character. It felt totally practical.

Thirdly, I would again have to say goodbye to the world of Weather Wardens when this series ended. And I did, but I also felt a sense of completion. So, that’s good!

About the last book itself, Ms. Caine doesn’t play shy when it comes to tragedies changing people forever. One of the main characters in this one was a little kid who was kidnapped and tortured by a power-hungry megalomaniac Djinn. When she is returned to her family, she isn’t shown to magically recover from all that has befallen her. She remains on the brink of becoming an unfeeling creature and her family keeps doing their best to bring her back. I liked the authenticity in that.

Finally, the ending was too and they lived happily ever after for me. While I wanted the characters to be happy, I didn’t want it to be so perfect. But mostly, the journey was a positive one. Can’t wait to see what Ms. Caine does next! 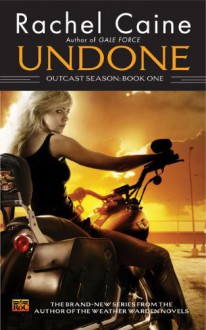 The Location gave a realistic feeling to the characters. There was always a new twist in the plot and that kept it exciting. I liked the way Cassiel and other Djinn where described as being different. Cassiel - with white, powder-puff hair and green eyes - was probably described as the most unusual. I like Cassiel as a character. She was some times cold and violent, then other times vulnerable and kind. She had her quirks too, being a little vain with her clothing and motorcycle. I went through this book in a 3 days, which is pretty quick for me. I enjoyed it all. Even though this was a spin off from Caine's other series about the Weather Wardens, it stands well on its own. This was the first time I read anything by this author, and I think I would pick up her other series given the chance. It was an interesting story with interesting characters and just enough magic thrown in.
Like Reblog Comment

Outcast Season: Undone is the first in Rachel Caine's new spin-off from her popular, cultish Weather Warden series. Cassiel is--was, since she is cast out from their ranks on the first page of the book--Djinn. Old Djinn, the ones that were never human to begin with and so have no sympathy whatsoever for the human race. She's cast out because she says no to Ashan, leader of the Old Djinn since the cataclysmic events of one or two Weather Warden novels ago. Cassiel's (don't call her Cassie) punishment is not simply to be cast out, but to be rendered effectively human, tied to a body, one body, that eats and sleeps and poops. What a drag. She's immediately found, taken in, and found a Weather Warden protector by the delicious David, leader of the New Djinn. There's a brief appearance by Joanne Baldwin, as much to establish cred for the series as taking place in this particular world as anything else, then Cassiel's off on her own adventures. As always, the story is both funny and quite dark. Kudos to any good writer of urban fantasy, who can create a world with such ridiculous premises--Djinn? really?--and render it so compellingly, well, believable. At one point I found myself thinking, "I don't think Cassiel, the former Djinn, would change her attitude toward humanity so quickly," and then laughed aloud at myself for even phrasing the objection. Outcast Season: Undone ends on a cliffhanger, with Cassiel, her Weather Warden friend and cohort Luis Rocha, and the collective fates of humanity and Djinn-kind hanging in the balance. To be continued, we're told, in Outcast Season: Unknown. Yup, I'll snatch that one up as soon as it hits the shelves.
Like Reblog Comment

Great start to the Weather Warden spin-off series. The characters make a brief appearance towards the end of the WW series, but this begins prior. Same world set-up and the main character Cassiel is of the "old djinn" reporting to Ashan who strips her of her djinn essence and casts her down to earth as a human. But she quickly learns that she now has to rely on a weather warden to replenish her energy and her "earth warden" powers. Lewis the leader of the WWs sets her up with another earth warden in NM to keep her out of their way. We get to watch her slowly become human (which the old djinn despise), as she assists Manny Rocha with his earth warden duties. Very touching moments as she adopts the Rocha family that takes her in and a lot of emotional ups and downs with all that entails.

I really enjoyed the scaled down drama in the first part of this spin-off as the WW are always fighting to save the world from one crisis after another. It was sweet to see her relationship with Manny's daughter Isabel unfold and become more human as she goes thru the discovery process of developing feelings for this family. I really think it helps to have read the WW series first, but might not be necessary. Definitely plan on continuing with this series, I like the less epicness of this one, but have a feeling that we might me headed back to the end of the world scenario with this one too.
Like Reblog Comment