Log in with Facebook
or
Wrong email address or username
Sign up
Already on BookLikes? Log in!
Incorrect verification code
Please, check your email, the code to access your BookLikes blog was sent to you already.
Enter code:
« Back Send
back to top
Search tags: pippi I am so torn in how to rate this book. While there were aspects that I absolutely loved, others things haven't aged well.

One thing I loved about this short, fun, whimsical book is that each chapter reads like a short story. There isn't necessarily a plot that goes all the way through and instead it chronicles some of Pippi's strange adventures. I enjoyed this aspect and it made for a nice reading experience. I could see this working well as a bedtime story, reading a chapter each night. The book doesn't have any sort of moral or lesson. It is just a fun read.

It was also refreshing to see a character like Pippi. She does whatever she wants and is heavily flawed, but in general tries her best. Yes, she lies, is "impolite" to others, and can be quite grating at times, but she is also brave, strong, and isn't afraid to go after what she wants even if it means offending people. She doesn't let bullies get in her way and show no fear when she has to step in and save the day. It's nice to see a female character who isn't so caught up in being nice all the time.

However, some things haven't aged well. With the various translations and versions removing certain racist words/scenes, it's difficult to determine what version contains what. In the version I read (which from what I understand had been updated to remove some obvious racism), there were still a lot of odd assertions about various cultures. It can be argued that at least most of these are lies and Pippi trying to tell interesting stories, but given that this is a children's book it can be very confusing. Some such assertions are how people in Egypt walk backwards and everyone in the Belgian Congo tells lies all day. The stories have the feel of much of old literature that talks about far away places, but these odd inclusions are just kind of cringey read in a modern context.

Also, the inclusion of the children playing around with and firing guns in the final chapter is certainly problematic. 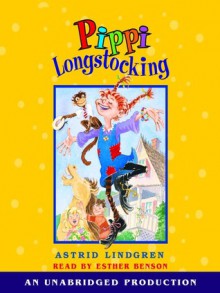 Love, love, love Pippi! This is by far my favorite childhood series. Pippi and her shenanigans always make me smile. The narration was good, not great. But the story more than made up for it. I prefer the second book to this one, but it was alright. It didn't seem at all familiar to me, so I don't think I ever got around to reading this one even though I own it. It's slightly uncomfortable at times with the way they refer to the natives of the island... And Tommy can be quite the bully to his sister sometimes! Also, there's a girl called Moana. :) I like this book more than the first. I didn't find Pippi so annoying in this one.

These books do have quite the nostalgic element to them for me. I loved each of Pippi's adventures as a child. :) I definitely enjoyed this one much more when I was a child. As an adult, I find Pippi annoying at times. It's still a fun book, but there are other children's books I'd much rather read over again.