Log in with Facebook
or
Wrong email address or username
Sign up
Already on BookLikes? Log in!
Incorrect verification code
Please, check your email, the code to access your BookLikes blog was sent to you already.
Enter code:
« Back Send
back to top
Search tags: police 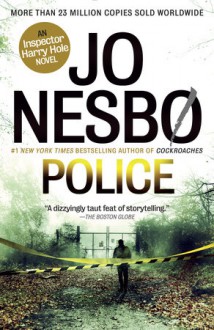 This is the 10th outing for Nesbo’s brilliant yet somewhat troubled maverick detective Harry Hole. The plot is interesting, police officers are being murdered at the site of crimes they failed to solve in the distant past and Oslo’s finest are frankly clueless as to how to approach the case, never mind solve it. Harry, banished to the academic world of lecturing, has his own troubles in the form of a fanatical student Silje Gravseng stalking our hero, and fighting his own demons in the form of alcohol. I enjoy the writing style of Jo Nesbo, a true exponent of scandi noir, but the problem I have with this book is our hero does not actually enter the story until 200 pages in. Up to this point a twisted brutal killer is leading the local Oslo police on a merry dance! But very soon the good citizens of Oslo can once again rest easy as within a very short time Harry is putting the pieces of the jigsaw together and they know with confidence that the perpetrator of these evil acts will soon be held accountable. The troubled relationship between Harry and Rakel reaches an unexpected but pleasing conclusion. I love Jo Nesbo’s writing and even if our antihero is not present for the first 3rd of the novel “Police” is still an excellent read and a great addition to the series. This is book #2 in The Chandler Brothers series.  This book can be read as a standalone novel.  For enjoying the series, and having no spoilers, I recommend reading this series in order.

Rick meets Kendall when she is still dressed in her wedding gown from leaving her wedding.  At first he thinks she is part of his mother's matchmaking scheme.  Then he finds out they already know one another.

Kendall does not think she will stay in this town.  Then she gets to know Rick and his family better and life is looking up.  With more surprises than a novel should have, these two fight the attraction that blinded them at their second meet cute.

This series is so sexy and so good, it is worth reading it order.  This is the couple that I love to re-read, as they both have such rich back stories.  This makes their getting together even m ore interesting.  I love this family and all the heat and heart that the story brings to the table.  I give this a 3/5 Kitty's Paws UP! 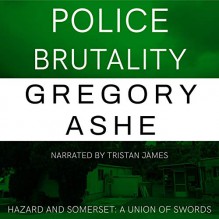 was back in December of 2018...so not really that long ago and I admit I did it for two reasons...#1 some of my friends were reading or listening to his stories and saying some good things and #2 I discovered that Tristan James was the narrator and I've been a fan of his from the first audio book narrated by him that I ever listened to. I've enjoyed around 50 audio books narrated by Tristan James...that is if you only count each title once and not how many times I've listened to a particular audio book...which would mean that I've listened to a whole lot more.

But the subject here is Gregory Ashe's 'Hazard and Somerset: A Union of Swords' series or to be more precise 'A Union of Swords' book #2 'Police Brutality'. Fans of this pairing will know that while this is only the second book in this series this is in fact the eighth novel featuring this couple...give or take a novella and/or story here and there.

The important thing to take away here is that if you want to enjoy the full Hazard and Somerset experience you need to go back to the beginning...back to the original series and yes, it might seem daunting but it's so worth it. I was actually late to the party in discovering what a hidden gem these stories are but once I found out, I was all in. I gathered up the audio books and I marathoned my way through book after book loving every minute of them to the exclusion of all else.

As a rule I'm a big fan of series that present a different set of MCs every book or even two...mostly because in the past I've found that my interest tends to lag as things begin to feel repetitive and so far that has not been the case at all with these stories. Not only has the criminal/investigative aspect of these stories varied in terms of the who, what, where, why and when but the relationship dynamics between Ellery and John-Henry has held a realism to it that's been to say the least kept my need to know 'where things are going for these two men?'

Back in 'Pretty, Pretty Boys' we watched as Emery Hazard returned to his hometown to find himself partnered with John-Henry Somerset the bane of his existence when he was younger and as they go from antagonistic partners to cautious allies to friends and more in each successive story the reader gets to share in the emotional roller coaster ride as well as the dangers they face along the way.

Even after all this time things are not perfect between Ellery and John-Henry and just like couples in the read world their relationship is a work in progress. It's not all sunshine and light with these two...sometimes it's hard and it's just not pretty.  It was at the end of the first series that we saw Emery Hazard leave the police force and with the encouragement of his John-Henry, he set out to become a private investigator.

So now here in their follow up series 'A Union of Swords' we get to see the effect of Emery's decision on their relationship. In book #1 "The Rational Faculty" we saw the beginnings of how things are changing for the former work partnership and it's impact on their personal relationship but here in book #2 "Police Brutality" the changes continue and with John-Henry talking about marriage and the addition of Dulac, Somerset's  recently acquired work partner, who seems to be there at Hazard's every turn and add in Hazard's newest client...Walter Hoffmeister, a rather unpopular police officer that we've encountered in previous stories, along with the fact that 'The Keeper of Bees' is very probably still around and a  threat to all that Ellery holds dear and this series is shaping up to be even more intense and mind gripping than the first one.

As much as I enjoy all aspects of the story, I have to admit for me it's the dynamics between Hazard and Somerset that keep me coming back for more. I love how these two men are together. I love that they see the flaws and imperfections in each other, that they fight...sorry, but in the real world people fight and argue and they make up. They say I'm sorry...not always with words but in ways that only someone who truly loves them can see and understand. Theirs is not a perfect relationship but one that's built on love and determination with a bit of sarcasm and snark thrown in for good measure.

Hazard and Somerset is about second chances, it's about flawed men, broken men who are to stubborn to stay down no matter how hard the world tries to keep them there. It's about men who do the right thing even when it's often not the easy thing to do and it's a series that grabbed my attention and has won my heart. I love this couple and having been there for the beginning I absolutely want to be there for whatever comes next.

An audio book of "Police Brutality" was graciously provided by the author in exchange for an honest review. *verified purchase April 2020* I loved Always, and I waited for so long for this, the followup, so very long. And I struggled. It took me 2 months to read this, I had to read a little bit at a time, because I found it such hard work and I have no flipping idea WHY! It is a lovely story, I did love the feathers thing. Both Robert and Landon have their say. I just . . . don't know! I did finish it though, so . . 3 stars **same worded review will appear elsewhere**
romance Contemporary male male military police dudes 2020 reads personal 2020 3 star reads 2020
Like Reblog Comment
show activity (+) This was a strong installment in the series, but not one that was memorable. A story of vengeance of two wealthy white privileged boys who get their hands on a bio-weapon. Although there were scenes that were well *chef's kiss* worthy, such as Peabody going OFF on the snide, smug asshole headmistress when her Free-Ager childhood was besmirched, there was little to go on mystery wise until the second death. It was nice to see Louise and Charles and an update to Rochelle and Crack. I think Roarke's assistance in this case was appropriate and not so over-reaching as he can get sometimes, especially in these later books.