Log in with Facebook
or
Wrong email address or username
Sign up
Already on BookLikes? Log in!
Incorrect verification code
Please, check your email, the code to access your BookLikes blog was sent to you already.
Enter code:
« Back Send
back to top
Search tags: prometheus 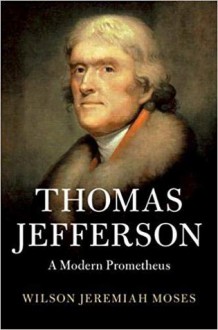 My latest podcast is up on the New Books Network website! In it, I interview Wilson J. Moses about his survey Thomas Jefferson's manifold intellectual activities and what they reveal about his ideas. Enjoy!

It took me a good chunk of the book to figure out what Moses is doing it, but I finally figured it out. Basically it's a dissection of Jefferson's thinking in a variety of areas, from science to economics to political theory. It's definitely interesting, but not the first title I'd recommend to anyone seeking a book on America's third president.

I'm reading this for an interview and so far it's proving dense. It's a series of essays about Jefferson's reputation that range pretty widely, and assume a great deal of familiarity with American history. 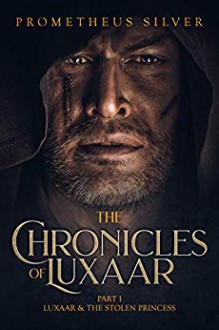 I loved reading this dark fantasy story and I’m looking forward to the next installment of the Luxaar Chronicles. It was packed with action and wtf moments, set in a world where magic is a common occurrence. While reading it there was no dull moment!

The story is written in first person point of view and follows Luxaar through his misadventures with a touch of magic and mischief. Luxaar is by no means an honorable man, he’s a thief on a quest. Most books (at least the ones I read) have one of the main characters as a hero. The Chronicles of Luxaar is not most books. If anything, Luxaar is the anti-hero of his world. The way Luxaar is portrayed reminded me quite a bit of Riddick (for those who aren’t familiar with the character, Vin Diesel played Richard B. Riddick in Pitch Black and The Chronicles of Riddick). He’s no gentleman if anything Luxaar is a highly skilled predator and an extreme survivalist. He’s ruthless, morally flexible and doesn’t think twice about killing what stands between him and his quest. Although this isn’t a particularly gory story, it’s not for the faint of heart either. There are several passages you might want to skip if you’re squeamish about graphic descriptions of blood and death. Such as this:

“I drew my bow and fired. The arrow went straight through the door guards throat, causing blood to bubble and spurt around the wound.”

This reminded me again of Riddick talking about his favorite killing method (about the voices in his head “The ones telling me to go for the sweet spot just to the left of the spine, fourth lumbar down, the abdominal aorta. It’s a metallic taste, human blood. Copperish. If you cut it with peppermint schnapps, that goes–”)

But back to the book at hand, Luxaar is not a hero. So when during a heist he finds a beautiful princess tied to a pole and kept prisoner, his first reaction is not to save her but to leave her behind.

“She was young, beautiful and not my concern.”

After many pleas from his sidekick, The Rat, and the promise that her people would pay a hefty reward for her safe return, he reluctantly concedes to free her:

“Fine, free her. But let her know that if she gets in our way or can’t keep up, she is on her own. And if it turns out she is lying to us, I will sell her to the whore houses down in the Swarni district.”

One thing that I loved about this story is that it’s fast-paced, full of action and doesn’t waste time with unnecessary descriptions. The flow of the story is excellent and keeps you on your toes. Perhaps I’m biased, but knowing it was written by a man I expected a lot of action, not a lot of love and maybe some gore. Let me tell you something; it did not disappoint!

Something that makes this story stand out from other books in the genre is its lack of predictability. Just when you think you’ve figured it out, you realize that nothing is what it seems. It keeps you guessing until the very end and leaves you wanting for more! 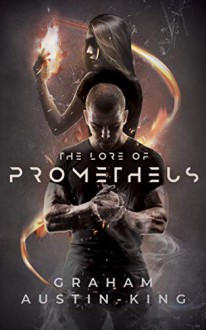 John Carver has three rules: Don't drink in the daytime, don't gamble when the luck has gone, and don't talk to the dead people who come to visit.

It has been almost five years since the incident in Kabul. Since the magic stirred within him and the stories began. Fleeing the army, running from the whispers, the guilt, and the fear he was losing his mind, Carver fell into addiction, dragging himself through life one day at a time.

Desperation has pulled him back to Afghanistan, back to the heat, the dust, and the truth he worked so hard to avoid. But there are others, obsessed with power and forbidden magics, who will stop at nothing to learn the truth of his gifts. Abducted and chained, Carver must break more than his own rules if he is to harness this power and survive.

This story is a fantastic mix of action, danger and magic. I loved it!

John Carver is an ex-soldier and war veteran. I liked this man a lot. He's someone you want watching your back, but he's seen and done things most civilians don't experience. He's faced danger and sacrificed much to protect others. When his squad was killed in Kabul five years before, his life changed forever. Some call it PTSD, others call it crazy, but John's also known to some as The Miracle of Kabul. To find out why you'll need to read the book. In dire need of funds, he finds himself headed back to Afghanistan as a security consultant. But things are not so simple, and as danger threatens, he will have to embrace his inner power once more.

Mackenzie Cartwright is a nurse working in Kabul, kidnapped while heading home after a shift at the local hospital. I liked her a lot too. She has an inner strength that shines through, even when dealing with her capture and subsequent torture.

This story is not for the faint-hearted and told through John's and Mackenzie's point of view. I was riveted to the story from the first page and didn't put it down until I finished it. Having read Faithless in 2017, I was expecting a dark, atmospheric tale, and that's what I got, though it was a little less claustrophobic since its set in a desert rather than an underground mine. I could tell a lot of research had gone into the writing of this book, from the military-speak to the weapons used, and everything in between. None of the violence is gratuitous in any way; it only enhances the realistic feel to the story.

Both John and Mackenzie go through hell, so there's little wonder their psyche becomes fractured. I think it was Lewis Caroll, who's character, The Cheshire Cat, said (and I'm paraphrasing here), "We're all a little insane here." What is reality? What is normal? The author explores this concept and adds a twist to it. We know only a fraction of what the brain is capable of, so who's to say that there's no potential for our minds to evolve to use capabilities such as ESP, telekinesis and other paranormal activity. It would be interesting to find out. But it could be several decades, if not a few hundred years before the human mind is understood enough to know if these powers are latent within everyone. Or if it's our perception of the world around us that creates our reality. I find it intriguing.

There is a lot of action, particularly towards the middle and end of the book, that had me sitting on the edge of my seat. By the time I reached the end of the book, I felt breathless and was left wanting more. I don't know if the author intends to turn this into a series, but I would be interested to see what John and Mackenzie are capable of together in the future.

Graham Austin-King has written an exciting, dark military fiction novel that kept me turning the pages. This book is superb! I think that this book is a lot stronger than The Riven Wyrde Saga and shows this author's growth in confidence as a writer. I love his fast-paced writing style, and the story flowed wonderfully from beginning to end. The characters came alive on the page and felt remarkably lifelike.

Although there is mention of sex, it’s not explicitly shown. Nevertheless, I do not recommend this book to young children or those of a nervous disposition, as there are scenes of violence and gore (battle scenes amongst others) that could be very disturbing to some readers. However, I highly recommend this book to older teens and adults alike if you love dark thrillers, military fiction, and/or paranormal fantasy stories that have an X-Men feel to them. - Lynn Worton