Log in with Facebook
or
Wrong email address or username
Sign up
Already on BookLikes? Log in!
Incorrect verification code
Please, check your email, the code to access your BookLikes blog was sent to you already.
Enter code:
« Back Send
back to top
Search tags: psychedelic-drugs

review 2019-07-23 15:50
Recommended to wellness retreats enthusiasts with a sense of humour 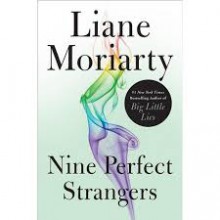 I thank NetGalley and the publisher (Michael Joseph UK) for providing me an ARC copy of this novel that I freely chose to review.

I’ve read and reviewed two novels by Moriarty, Little Big Lies and Truly, Madly, Deadly, quite different but enjoyable. The first one is funnier, sharper, wittier, and flashier than the other, which is more intense, focuses around a single event and its consequences (although that is a structure the author comes back time and again), the characters are less extreme, glamorous, bubbly, and more evidently damaged and vulnerable. Secrets and lies are a common occurrence, and the difference between appearances and reality and the games people play are present in both. There are similarities in some of the themes and subjects in both novels, and these are also evident in Nine Perfect Strangers, which, in my opinion, sits somewhere in between with regards to the tone and the subject matter. The high quality of the writing is also a constant in the three books.

We have a fairly large cast of characters, seemingly unrelated and contrasting in their beliefs and attitudes to life (although not particularly diverse), composed by the guests (or clients) at an Australian wellness retreat, and the staff members. The guests are: a family of three (Napoleon, Heather, and Zoe, their daughter, whose 21st birthday is due during their stay at Tranquillum House, all still struggling with a big loss in their lives); a young couple, Jessica and Ben, who won the lottery and now are rich beyond their wildest dreams but not necessarily happier; a romance writer who hasn’t moved with the times (Frances); Tony, and ex-footballer (Australian football) who used to be known as Smiley but seems to find it difficult to find his place in the world now, Lars, a divorce lawyer living happily (?) with a long-term male partner but afraid to commit too much (no children); and Carmel, a divorced mother obsessed by her weight and lacking in self-confidence. The staff members are Masha, Yao, and Delilah. Masha, who used to hold a high-powered corporate position, has rediscovered herself as a wellness guru. Delilah used to be her PA in her previous incarnation and has come along for the ride, and Yao, formerly a paramedic, met Masha in interesting circumstances and is convinced by her programme and devoted to her. At first, this mishmash of characters seem straight out of a joke book, and they appear as caricatures, but through their “therapy” we get to know them as fully fledged individuals and get to empathise with them. There are parallels between them, perhaps inevitably. All of them are struggling with changes in their lives, due to age, to personal tragedies, to external events, and have difficulty coming to terms with those and moving on. Some of the characters are better drawn than others although none of them are true evil, they all (or most) have their moments of clarity and stardom, and I think most readers are likely to find somebody to connect with.

The story is told in the third person from most of the characters’ points of views, although some get more space than others (Frances, Masha, Yao, for example have a great deal to say), but this varies as the story evolves, and this technique helps readers get into the thick of things. There is a fairly dramatic prologue, which takes place ten years before the rest of the action and at first appears unrelated, but is not. After the main action of the novel ends (this somewhat “false” ending is cathartic but not quite as dramatic as the reveals in the two other novels), we have a number of chapters that follow the characters (some of them) for a period afterwards, providing a protracted ending that I really enjoyed and thought suited the story well. (One of the problem with therapies is that sometimes we don’t get a long-enough follow-up to see how effective they are long-term. This is not the case here).

I won’t go into detail about the actual therapy the guests engage in, as I want to avoid spoilers. Let’s say some of the elements will be familiar to people who have ever undertaken (or even read about) a retreat, but there are some pretty big surprises, and things turn pretty dark too, although people who prefer their novels free from major violence and blood are on safe ground here. That does not mean that there are no serious subjects at the heart of the novel (loss and suicide feature heavily, as does drug use, growing older… and there are major questions asked, such as: what defines who we are, how much value we place in those around us and our relationships with them, our role in society versus our own interests…), but there are moments of mirth and hilarity (many down to Frances, who made me think of the heroin of a chick-lit novel growing older disgracefully, as should be), and despite the difficult moments all the characters go through, this is not a challenging reading experience, and there are no great insights or revelations bound to make any readers feel enlightened or keep them thinking for ages once they finish the novel. It’s true that all the characters learn something by the end, but, if there is a serious message in this novel is that there are no quick-fixes or shortcuts to solving one’s problems, and we have to keep working at it day after day. But you might come to a different conclusion if you read it.

A few quotes from the book:

So I called reception and asked for a lower, cloudier, more comfortable sky. (Frances, describing how she felt contemplating the sky that day).

Sol was a real man who didn’t like adjectives or throw cushions.

She sucked in her stomach, ready to take it like a man, or at least like a romance novelist capable of reading her own royalty statements. (This is dedicated to all fellow authors).

In sum, I enjoyed the novel, although it is not my favourite work by the Moriarty. It has light touches and funny moments, some serious ones, pretty memorable characters, some ominous and dark undertones, it is easy to read, well-written engaging and entertaining. Another Australian author whose books I eagerly await.