Log in with Facebook
or
Wrong email address or username
Sign up
Already on BookLikes? Log in!
Incorrect verification code
Please, check your email, the code to access your BookLikes blog was sent to you already.
Enter code:
« Back Send
back to top
Search tags: rocknroll 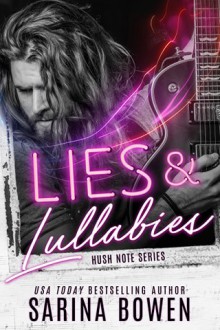 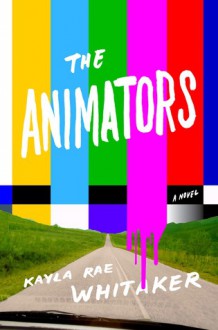 The Animators struck a deep chord with me on two levels: as an artist and as best friend to a fellow artist. If you are either, you'll likely love this novel as I did.

Funny and engaging from the first page, The Animators starts with our narrator, Sharon, in college, where she meets the charismatic Mel Vaught. Both are aspiring animators who are into the same shit and share an aesthetic; both come from poor, rural southern U.S. backgrounds. Many of us in the arts could identify that time when we learn we're not actually outsiders, that others share our interests; college tends to be a place where we find our tribe.

But this is not a novel about being a college arts student. The narrative quickly brings us to a present where Sharon and Mel have made a successful indie animated feature that centers on Mel's life. They live together in New York City. Mel drinks and does a lot of drugs; she's the life of the party. Sharon...is not. She spends a lot of time and emotions angsting over her latest romantic interest, of which there are many.

Tension develops between the two, much of it, from Sharon's perspective, owing to Mel's lifestyle. There's a blowout, followed by a shocking, life-altering health crisis for one of them. It's a reset that leads them on a path to mining Sharon's childhood for their next project. This raises very real questions artists face about using their lives in their art in ways that may hurt loved ones. I wasn't quite satisfied by the resolution to this issue, but I appreciated its being seriously considered.

This book excels at depicting partnerships between women, their working lives as artists, and craft. The prose is engaging, the characters vivid, and there are some heartbreaking and harrowing moments. Even if you're not an artist or friends with one, I can't imagine Whitaker's (first!) novel not winning you over from page one. 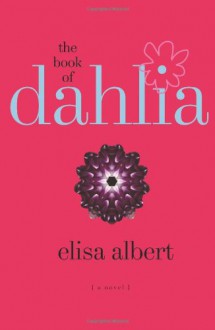 Dahlia Finger is kind of an asshole. She's 29 and spends her days sprawled out on her couch, smoking weed and watching movies, funded by her well-off father. One night she has a seizure and learns that she has a brain tumor. Though no one will actually say it, she doesn't have long to live.

This is not one of those novels of illness where there's redemption ahead or that's supposed to make you hopeful and grateful for life (beyond not having a brain tumor). For that reason, I appreciated and responded to it. Unlike all the books on cancer Dahlia and her parents buy in bulk that say "you can beat this thing" if only you have the right attitude, in effect making you responsible (and to blame) for your own illness, The Book of Dahlia illustrates how we as a culture fail to deal with mortality. Though it's not addressed specifically in the novel, I personally wonder how much that American idea of pulling oneself up by the bootstraps is at play, which easily translates into victim-blaming when one can't.

One of the platitudes often given regarding illness and healing is that a sufferer must let go of old resentments and anger, that these can make or keep one sick. As Dahlia considers and recounts her past, it's clear she has almost nothing but resentments, from a mother who essentially abandoned her family to the older brother, once close, who took out his own pain on her in the cruelest ways. Throughout her life she's plainly asked for help and been ignored. Maybe it says something about me that I couldn't blame her for her stubbornness in forgiving and forgetting. It feels like the only way she's able to have any agency during her illness.

If this sounds grim, it's not, or not only! Dahlia's voice is often funny, enough to make me laugh out loud while reading. Her humor may be bitter, but that suits me fine. At the end of the book there was a reading group guide that asked more than one question about whether one is able to sympathize with her; I absolutely could. I often like female characters in popular culture that others find abrasive, though I often wonder how much it's about gender.

The toughest and most affecting aspect of this book was the relationship between Dahlia and her older brother. As a younger sister myself, I'm always interested in and more sensitive to depictions of that dynamic. It broke my heart to read about the turn their relationship takes, how long Dahlia holds out and has faith in him, even insulting herself to get ahead of his insulting her. I both wanted and did not want Dahlia to forgive him. It made me want to call my own brother and thank him for not being a dick! 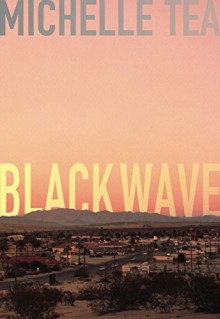 The more I read (and watch movies and TV), the more I value encountering something unlike anything else I ever have before. Black Wave, by Michelle Tea, immersed me in a world new to me in several ways.

Though there are occasionally individual queer characters in the books I read, I haven't read much queer lit where a larger community is represented, especially queer women. Black Wave is set in San Francisco in the 90s at the start, an alternative past where gentrification has strangled most of the culture(s) from the city. In addition, the world appears to be ending due to advanced climate change: it's dangerous to be out in the sun even incidentally, the ocean is a trash wave, many animals are extinct, and invasive species have overtaken the dying native flora. In other words, the environment's death mirrors a cultural and, as is soon apparent, a personal one.

The protagonist, Michelle (like the author), is in her later twenties, and is the kind of addict who tells herself she's not because she doesn't shoot heroin but snorts it and is able to keep her job at a bookstore. She falls in love (or becomes infatuated) easily and hooks up with many of the women who come into her orbit, despite being in a "steady" relationship with a partner more stable than she is. At one point the point of view shifts from Michelle's to her girlfriend's, who thinks she's a sociopath.

That feels pretty accurate, but one of the amazing things about Black Wave is that despite Michelle's objectively unlikable character, I still felt very much invested in her. In part this is due to the humor and energy of the writing. For example:

Michelle seemed more like some sort of compulsively rutting land mammal, a chimera of dog in heat and black widow, a sex fiend that kills its mate. Or else she was merely a sociopath. She was like the android from Blade Runner who didn’t know it was bad to torture a tortoise. She had flipped [her girlfriend] Andy onto her belly in the Armageddon sun and left her there, fins flapping.

I may also personally respond to Michelle because she's a writer, one who's even published and had a sort of local fame. Around the midpoint of the book when she moves to L.A., the narrative is deconstructed as she attempts to write a new book. It becomes clear that not everything we've read so far is as it happened. Another aspect I liked is that somehow this sudden shift doesn't feel like a trick as can happen in many modernist and post-modernist writing and metafiction. How and why I don't know, but after some minor readjustment on my part as a reader, I was still invested.

I've often noted what a structure fanatic I am, and the last major selling point of Black Wave is the way it beautifully spins out in the last third.

Tangents were Michelle’s favorite part of writing, each one a declaration of agency: I know I was going over there but now I’m going over here, don’t be so uptight about it, just come along. A tangent was a fuckup, a teenage runaway. It was a road trip with a full tank of gas. You can’t get lost if you don’t have anywhere to be. This was writing for Michelle: rule free, glorious, sprawling.

As the world ends, people begin dreaming vividly and lucidly about others who exist in the real world, all over the world. They're dreams of connection and love where identity is fluid, and some begin living in them, like Michelle's bosses at the bookstore who hand over the business to her. So the world ends, but somehow Michelle's in a good place, and so was I.

Always nice to add some books to my little library. I have read Duma Key, but borrowed from the library. Now I can read it again, whenever I want! :)

Sex, drugs and rock'n'roll; reading about dead rock stars is my kind of thing. Especially if they have died young or in any way tragic. 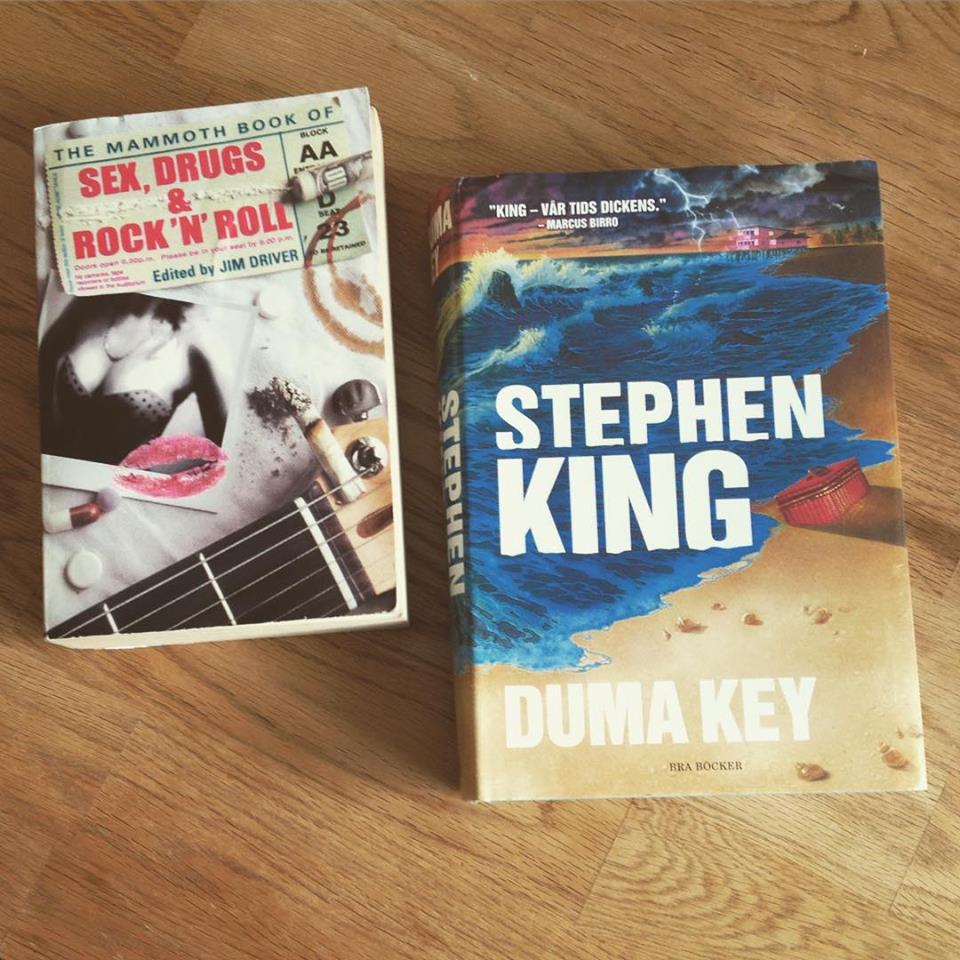