Log in with Facebook
or
Wrong email address or username
Sign up
Already on BookLikes? Log in!
Incorrect verification code
Please, check your email, the code to access your BookLikes blog was sent to you already.
Enter code:
« Back Send
back to top
Search tags: the-fiction-guild A bit of mystery, peril, a widow in need and men of honor, along with an interesting secondary cast of characters.  This romance is lovely and heart-felt, and I loved every minute of this story, surprisingly even the POW camp flash-back scenes. What stood out most for me, though, was how well Miranda's depression was portrayed, along with the way the story highlighted the continued importance of reputation in the post-Civil War Reconstruction years.

I am so looking forward to An Uncommon Protector, the second Lone Star Hero's Love Story, in early 2017 and I highly recommend The Loyal Heart for those who enjoy a story of regained hope, faith, and love.

This review refers to a free review copy received from Thomas Nelson and Zondervan's Fiction Guild.  All opinions expressed are my own. My full, unedited review can be read at http://wp.me/p5Tcfi-1AE What a joy this book was to read! I had no expectations going into it, and was hooked from the outset. We are quickly introduced to Isabel Creston, 20 years old, living at a school whose rules she cannot quite seem to follow and immediately bringing to mind Jane Eyre and Lowood School. But Isabel is the guardian of her 8 year old half-sister Lizzie and does not get to go off to a governess position. Instead, she is taken in by relatives and some of the more Regency/Jane Austen aspects of the story (could the Aunt start off being any more Austen mother-ish?) begin to appear.

One would think this would brighten the story, and it does to some extent, but the gothic elements abound as Isabel discovers on her journey to and life at her Aunt and Uncle's home of Emberwilde Hall. The forest in particular is a place no young lady should venture, but venture there she does and, again reminiscent of Jane Eyre and other gothic tales, meets with mischief while, in the more Austen-esque feeling portions of the novel, considering the advantages and desirability (or lack thereof) of more than one eligible male.

The villains are a bit dastardly, not everyone is quite who they appear to be, the heroine is likable and the hero is a man she can admire. From the first scene, where Lucy Lovett comes to in a diner's restroom and realizes that she's lost time, I was hooked.  I do like a good memory loss storyline, as long as it is handled believably and consistently, and this one is.

While Lucy is emotionally back to the time when she is engaged to and deeply in love with Zac Callahan, he has been spending the last seven months trying to move on from the heartbreak of her leaving without a word just weeks before their wedding.  Rescuing her from a diner, in a wedding dress, is not how he planned to do this.  But she doesn't remember moving to Portland, Maine or becoming engaged to another man.

Back in Summer Harbor, it is a slow journey for Lucy as she struggles to make sense of everything, while she dodges paparazzi wanting to interview the "runaway bride."  It is also a slow journey to regain Zac's trust and the regard of the townspeople.  Small towns can be quite protective of their own.

Here are a few things I really liked about this story:

The Goodbye Bride is the second of the "Summer Harbor" novels.  While it is not necessary to read the first, Falling Like Snowflakes, if you do want to read them both then it would be best to do so in order.  Otherwise, when Eden and Beau's backstory is given it will be a huge spoiler.

I listened to Falling Like Snowflakes, as a library/Overdrive audiobook and, while I enjoyed it, I thought it was a bit light and fluffy of a read for including such a serious topic.  I also thought it was unfair of me to rate or review it since I was never able to give it my full attention, as I was listening to it at work.  Based on this second book, it is likely that reading a physical copy and giving it my full attention would not have changed my impressions of it.  However, where Falling Like Snowflakes wasn't completely my kind of book, The Goodbye Bride definitely is.

I was trying to think of a way to describe this book, and books like it, and came up with candy - in this case, I'm thinking specifically of those minty little pastel nonpareils that used to be almost as ubiquitous at weddings as the little pillow shaped after-dinner mints.  This kind of book is a tasty little treat, one you might not want every day, but you occasionally crave them and when you have them in all their sweet, minty freshness, you just can't stop.  Oh, yeah.

Love a light, clean, contemporary romance with a memory loss storyline where the hero is a charmer who can cook?  This just might fit the bill.  The Goodbye Bride is a feel good contemporary - a breezy read perfect for a spring evening or an afternoon by the pool, listening to the playlist on Spotify (http://bit.ly/1UqZOry) - but be prepared to want to read it in one go.  It kept me up way past my bedtime.  I just had to know how this love story had gone wrong and how it would right itself.

This review, with quotes, was originally posted on my Wordpress blog at http://wp.me/p5Tcfi-WY

Disclosure of Material Connection: I received this book free from the publisher through Thomas Nelson and Zondervan's Fiction Guild. I was not required to write a positive review. The opinions I have expressed are my own. I am disclosing this in accordance with the Federal Trade Commission’s 16 CFR, Part 255 : “Guides Concerning the Use of Endorsements and Testimonials in  Advertising.” 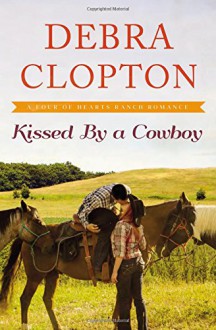 Reeling from divorcing her philandering husband, Cassidy Starr arrives late at night to begin moving in to the Texas farmhouse she inherited from her beloved great aunt Roxie. Jarrod Monahan, the cowboy-next-door, is quick to check on the lights over at the neighboring farmhouse that had been empty for five years.  While his arrival is timely, it is not an ideal way for Cassidy to encounter the man who had broken her young heart.  But it is fun for the reader...

Between rattlesnakes, wild hogs and other critters, rustlers and roundups, festivals with fireworks, women matchmaking and men gathering at the local feed store, this contemporary romance has much in common with the historical western romances that are my more usual reading fare.  There is the humor I enjoy, the integrated faith that I appreciate, and the engaging hero and heroine as well as the wonderful secondary characters that I love.

Cassidy is endearing in her emotionally wounded, slightly accident prone way, and Jarrod is a stoic cowboy to crush on (if you crush on fictional characters) who finds himself nearly waxing poetic to the woman who he let get away.

"Have you ever seen anything so perfect?"

"Nope," he said honestly. "Nothing.  And the lambs are cute too."  Her eyes widened and he realized he'd actually said that out loud.  "I'm just telling it like I see it." (p138)

As this is the third book in a series, I was a little apprehensive about reading it first.  While there are some obviously recurring characters, including the main couples from the prior two stories, it did not suffer from my not having read them.  The secondary characters are a delight.  Jarrod's brothers and their wives are charming, the people of the town are amusing, and the secondary romance of two of the older townspeople added so much to the story.

Debra Clopton's writing is deceptively easy-going and quite approachable.  One of the things she does so well is giving the reader a consistently strong feel of the setting.  This was both helped and hindered, for me, by some of the word choices.  I could have done with a few less uses of "y'all" in the dialogue, while I was absolutely charmed by some fun turns of phrase in the narrative.

This story was a delight to read.  Sprinkled with nice touches of humor, just the right amount of drama and action, integrated faith that is lived - not preached - by the characters, and a great blend of the daily life of a ranch and farm, secondary storylines, and the development of the primary relationship.  Definitely one I would recommend and I hope to read more from Debra Clopton.

The original, full (well, slightly longer) review is on my blog at http://wp.me/p5Tcfi-RO

Disclosure of Material Connection: I received this book free from the publisher through Thomas Nelson and Zondervan's Fiction Guild. I was not required to write a positive review. The opinions I have expressed are my own. I am disclosing this in accordance with the Federal Trade Commission’s 16 CFR, Part 255 : “Guides Concerning the Use of Endorsements and Testimonials in Advertising.” Rarely do I just start reading a book knowing so little about it, and then to find it this surprising and compelling turned it into a 4.5 star (or 9 tissue) read.  Celeste Fletcher McHale took me on a roller-coaster of a ride with this tale of three lifelong friends in a small southern town.  What starts out as a story of a wife whose suspicions about her husband's fidelity lead to her and her friends hiding her own indiscretion from him, turns into a tale of love and friendship that had me laughing and crying in turns.

This is a story about small town life in the South, where everyone know what you are up to - sometimes before you do - and a man from Mississippi is a 'foreigner.'  It's about friendship and devotion.  It's about Sunday morning Christians facing life's difficulties and those difficulties challenging even those with strong faith.  It's about a marriage.  It's about love, jealousy, suspicion, emotions and circumstances that get out of hand with help from alcohol, infidelity, other misguided decisions and their consequences. And it is the story of the difficult year in which Carrigan, the narrator, becomes less self-centered and selfish.

Excellent storytelling combined with laid back pacing, the writing is deceptive in the best way.  Even when not much seems to really be happening, it keeps you reading to find out more.

If you like stories about internal struggles, about marriages going through difficult times, small town life, "chick lit," or about friendships, then give this a try.  I recommend it.  If this type of story appeals to you, but you normally would not read Christian fiction, I highly recommend that you give this a shot - it is a bit "edgy" for Christian fiction and may surprise you.

My full review can be read on my WordPress blog at http://wp.me/p5Tcfi-HL

Disclosure of Material Connection: I received this book free from the publisher through Thomas Nelson and Zondervan's Fiction Guild. I was not required to write a positive review. The opinions I have expressed are my own. I am disclosing this in accordance with the Federal Trade Commission’s 16 CFR, Part 255 : “Guides Concerning the Use of Endorsements and Testimonials in Advertising.”