Log in with Facebook
or
Wrong email address or username
Sign up
Already on BookLikes? Log in!
Incorrect verification code
Please, check your email, the code to access your BookLikes blog was sent to you already.
Enter code:
« Back Send
back to top
Search tags: the-haunted-baronet 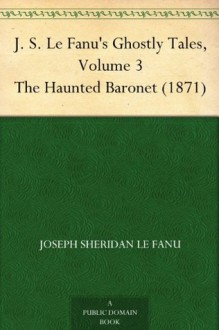 This old laptop's keyboard is really driving me insane. I know, I mentioned this already, but not only does the cursor hop from the current line I'm typing back into previous paragraphs, it also has an annoying way of taking me back a page in the browser to the previous page. Which then eats my post or comment. So I'm still here, just making all kinds of curses at my laptop. If next weekend goes well I may have a new one. Hopefully. (Am trying to avoid ordering online just because shipping might mean the box would sit outside. And lately we know that'd mean the poor thing would freeze to death.)

Anyway, this story is a reread for me, but this time I'm reading it with the rest of the collection. Which means I keep thinking I've already quoted from this story - I think I have, just not here at Booklikes. Specifically this bit about the snuggery - because when it's cold outside a snuggery sounds like a lovely thing to have.

And if you want some completely weird and random links (which of course I always end up looking at):

Urban Dictionary - which has taken up the word and used it to refer to sex in a snuggie. Or a group of people not having sex but all wearing snuggies. (Here's the wikipedia page for those of you who have not heard of snuggies.)

And now the quote:

"Good-natured Mrs. Julaper, the old housekeeper at Mardykes Hall, was kind to Feltram, as to all others who lay in her way and were in affliction.

She was one of those good women whom Nature provides to receive the burden of other people's secrets, as the reeds did long ago, only that no chance wind could steal them away, and send them singing into strange ears.

You may still see her snuggery in Mardykes Hall, though the housekeeper's room is now in a different part of the house.

Mrs. Julaper's room was in the oldest quarter of that old house. It was wainscoted, in black panels, up to the ceiling, which was stuccoed over in the fanciful diagrams of James the First's time. Several dingy portraits, banished from time to time from other statelier rooms, found a temporary abode in this quiet spot, where they had come finally to settle and drop out of remembrance. There is a lady in white satin and a ruff; a gentleman whose legs have faded out of view, with a peaked beard, and a hawk on his wrist. There is another in a black periwig lost in the dark background, and with a steel cuirass, the gleam of which out of the darkness strikes the eye, and a scarf is dimly discoverable across it. This is that foolish Sir Guy Mardykes, who crossed the Border and joined Dundee, and was shot through the temple at Killiecrankie and whom more prudent and whiggish scions of the Mardykes family removed forthwith from his place in the Hall, and found a retirement here, from which he has not since emerged.

At the far end of this snug room is a second door, on opening which you find yourself looking down upon the great kitchen, with a little balcony before you, from which the housekeeper used to issue her commands to the cook, and exercise a sovereign supervision.

There is a shelf on which Mrs Julaper had her Bible, her Whole Duty of Man, and her Pilgrim's Progress; and, in a file beside them, her books of housewifery, and among them volumes of MS. recipes, cookery-books, and some too on surgery and medicine, as practised by the Ladies Bountiful of the Elizabethan age, for which an antiquarian would nowadays give an eye or a hand."

In the story Mrs. Julaper proceeds to have some nice hot tea with another character in the snuggery. Which is what I'm going to think of dreamily on my commute to the train station tomorrow, assuming we can get to the metro. (Adventure! In a few weeks a greater adventure - can I get myself to the metro via bus? Suspense!)