Log in with Facebook
or
Wrong email address or username
Sign up
Already on BookLikes? Log in!
Incorrect verification code
Please, check your email, the code to access your BookLikes blog was sent to you already.
Enter code:
« Back Send
back to top
Search tags: too-many-alter-egos 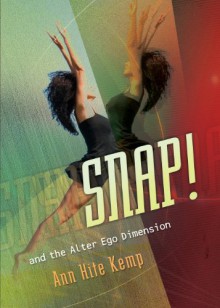 I was browsing Freading when this book caught my eye. I'm a sucker for “stuck in a video/computer game” stories, so I decided to download it. I'm honestly not sure whether this is a middle grade or young adult book. Most of the characters are 17 or 18 years old, so I'm guessing it's a young adult book, but it reads like it was written for a middle grade audience. Plus, it's illustrated, which is more common for middle grade books than for YA.

The story: Tammy, a South African teen, is hurt when her boyfriend Wayne loudly and publicly laughs at her pimple. While looking up some information on the Internet for him, she finds herself thinking that she'd like to be more like his gorgeous ex-girlfriend. Suddenly, a pop-up appears on her computer that won't go away. “Do you want to play Snap?” it asks. Answering “no” doesn't accomplish anything, so, given no other choice, Tammy answers “yes” and is sucked into the Alter Ego Dimension.

The Alter Ego Dimension is a gray place with visibility of five meters in any direction. Each person transported there brings with them anything they have on them and whatever was reflected in their monitor when they were transported. Poor Tammy is transported while wearing only her bikini, and suddenly finds herself in a fight for her life against her evil alter ego, whose goal is to overpower her, enter her world, and take over her life.

Tammy is saved by two Japanese teenagers, Etsu and Hiroshi. Later, the three of them are joined by Ulrich, a German teen, and Nick, an Australian. Somehow, they have to find a way to survive in the Alter Ego Dimension, which has no food or water beyond what others might have been transported with, and defeat their alter egos.

I'll start by saying that this was not what I expected to read. Snap isn't really a game, and no one ever plays it – the pop-up sucks people into the Alter Ego Dimension, they have to fight their alter ego, and that's it. I wouldn't call this a “sucked into a video/computer game” story.

Tammy and the others' efforts to survive were occasionally interesting. I don't know enough to say whether their way of creating drinkable water could actually have worked, but it sounded plausible enough to me. The “mixed bag” group had some interesting moments as well, particularly when Nick appeared. Despite the story he came up with, it seemed very likely that he was a murderer and potentially a danger to the whole group.

Unfortunately, that's about all I can say that worked for me.

I think I'd have preferred it if this book had starred Hiroshi and Etsu. Those two did what they needed to do without griping or crying about it, and Hiroshi was one of the most immediately useful characters in the group, using his grandfather's sword (which just happened to be reflected in Etsu's monitor) to fend off alter egos. And neither one of them had brains fried by thoughts of romance.

Tammy grated on my nerves. At first, I was willing to give her the benefit of the doubt. Maybe she was only starting off spineless and wimpy so she could eventually grow into someone strong enough to tell Wayne to shove it when he humiliated her and then had the gall to ask her to help him with his homework. I don't think that what happened in the book was an example of growth on her part, but perhaps it could be called “blossoming.” Whatever it was, it didn't appeal.

Tammy's one skill, mixed martial arts, was worthless in the Alter Ego Dimension, because her alter ego knew her thoughts and could perfectly counter every move she made. I don't think she tried her skills against others' alter egos, either. That meant she spent most of the book being protected by Hiroshi, and then by both Ulrich and Hiroshi. To be fair, I don't suppose Etsu was much more useful than Tammy, but at least she didn't cry about the necessity of killing transported birds for food.

Instead of growing stronger as her own person, Tammy latched onto Ulrich. She preened under his appreciative glances and enjoyed being protected by him. Considering what a jerk Wayne was, I could understand her joy at finding someone who thought she was wonderful just as she was, but her budding romance with Ulrich bored me. Plus, it bugged me that she put off telling Ulrich about Wayne, even after he asked if she was dating someone. Things only got worse when Ulrich and Wayne finally met, and the way the romance wrapped up in the end was disappointing.

Tammy and Wayne's didn't sound like modern teenagers to me, and sometimes this made for painful reading. Take this bit from Wayne's perspective, which prompted me to Google the author to see if she had the same hairstyle as Wayne's mom:

“[Wayne's mom] wore her hair shoulder length at the sides, but on top it was much shorter and almost stood upright. It looked modern and cool and Wayne felt a touch of pride whenever she met his friends.” (94)

This book felt dated. Tammy's understanding of how computer viruses work was...not good. Early on, Tammy was thinking about how much she hated computer viruses and wanted to protect her schoolwork against them.

“Once she had convinced her mother that they should have the Internet, it became much easier to protect her work. Now she could download the latest anti-virus programs and keep her work safe. It still made her angry, though, wasting her time and costing her, or at least her mother, money. Because of the cost, it had been a while since she last updated her computer.” (7)

Speaking of being dated, do South African science classes still allow students to touch mercury? There is a bit in the story where Tammy thinks about trying to touch mercury in her science class, with no mention of any safety concerns. Once again, I felt like I was reading the author's experiences and thoughts, covered with a thin veneer of what she thought teens sounded like. I could believe the author having done such a thing in her science class, but not a modern teen.

There were a few interesting moments here and there, but they were overwhelmed by the less-than-believable characters and stiff writing.

The book included illustrations, flat line drawings that wouldn't have been out of place in a coloring book. 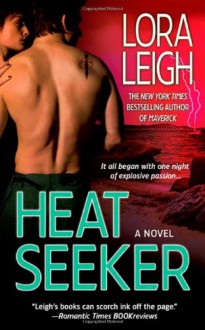 This is book #3 in the Elite-Ops series or book #8 if you count the Tempting Seals. In all my other reviews I started by raving about the sexy, alpha heroes, the erotic love scenes and the ensuing beautiful love story. Unfortunately with Heat Seeker we get none of these things and a word that keeps coming to mind is vague. Everything about this is vague; story, characters, dialogue, completed ideas. Essentially its just rehashed plotlines from every other book in the series in particular; Wild Card, Maverick and Hidden Agendas there's nothing new here. And when you combine that with the bad editing, too many confusing characters and a bland couple that except for having great sex in the shower never really gave me the feeling that they were in love, the whole thing is well, boring.
I also have no real idea of what our couple looked like or where most of this took place, because except for the brief mention of Aspen and all the sweaters and leather jackets being removed it’s never described. Bailey and Trent spend 90% of the book attending parties in mansions with big maze like gardens and knife wielding guests.
Here’s the plot as near as I can figure; we begin in Australia with CIA agents Bailey Serborne and Trent Daylen getting it on (Lora Leigh style) during a thunderstorm. The couple has just finished working a case together and they’re in love and celebrating. However the party is short lived as by the end of the chapter Trent has been ‘killed’ in an explosion set by the worst named bad guy ever, Warbucks.
5 or 6 years later (depending on your math skills) Bailey has quit (or been fired) from the FBI. She is now seeking revenge and trying to locate Warbucks, the man responsible for killing her wealthy parents (and a cousin I think) as well the love of her life Trent. Bailey is getting close to his inner circle when her plans are thwarted by a group of mercenaries. They are of course the Elite-Ops who also have Warbucks in their sights.
The agents team up with Bailey and for whatever reason it becomes imperative that she pose as John Vincent’s lover, something to do with securing a missile launcher and weapons of mass destruction which Bailey has the codes for!? Now John looks very familiar to Bailey even though he doesn’t have an Australian accent or say “Love” anymore but she’s pretty sure she knows who he is. And isn’t that also her long lost cousin David Abijah aka Micah Sloane aka Maverick aka Jerric Abbas lurking about? Just who the hell are these guys?
Trent Daylen aka Heat Seeker aka John Vincent might be a dead man but he’s never been able to get Bailey out of his soul and now after all the great sex they’ve been having in the shower he’s also never been cleaner or more complete. Theres just no way he’s going to let her go again once this mission is over even if his grumpy leader Jordan Malone owns his ass for the next 6 or 7 years (depending on your math skills.) Yup its good times with Lora Leigh
So Black Jack is up next and I’m hopeful that it will be better but I’ve also got my spread sheets and graphs ready just in case. Cheers.
bad guy with bad name blah dubious math skills Lora Leigh mass confusion men in uniform AFSpc-Op requires editor requires spreed sheet reunited romantic susp shelf 10 too many alter egos
More posts
Your Dashboard view:
All Reviews Text Photo Quote Video URL Activities
Liked posts Top Tags
Press About Terms of Services Privacy Policy Contact Us Blog FAQ Patronaty medialne BookLikes for Authors Partners panel more...
Team Themes Docs API Blogs
Copyright © 2021 BookLikes