Log in with Facebook
or
Wrong email address or username
Sign up
Already on BookLikes? Log in!
Incorrect verification code
Please, check your email, the code to access your BookLikes blog was sent to you already.
Enter code:
« Back Send
back to top
Search tags: villians

A great resource for young artists and Nintendo fans. Learn how to draw some of your favorite and most iconic Nintendo Heroes and Villains.
Like Reblog Comment
show activity (+) FATAL STRIKE is the tenth installment in Shannon McKenna’s romantic suspense series, and it was a book which I was looking forward to because it featured Miles, the geeky cute McCloud brother as the hero. I love geeky heroes and I always enjoyed Miles’ scenes and interactions with his brothers and friends in the previous books. However, I do think some people might get lost who haven’t read the last book, ONE WRONG MOVE, because I felt this was more like a direct sequel, rather than a stand-alone followup that loosely links with previous books in the series. I liked this because I felt the ending in the last book was rushed, and FATAL STRIKE continues the story-threads that were left hanging for me.

The book opens up with Miles, who has escaped into the woods while dealing and experiencing guilt and grief after the mission that failed to rescue Lara Kirk from her captors. Lara is still being tortured and experimented upon with the psi-max drugs that helped boost her psychic abilities. The only thing that helps to keep her sanity is when she manages to escape to a psychic plane called the Citadel. This is where she meets up with a dream lover, Miles. But Miles is unaware that this is truly Lara, and he feels that he is slowly going insane because of the events in the last few books. Miles has developed extrasensory senses and psychic abilities. Nonetheless, when Miles finds out Lara is reaching out to him, he is determined not to fail again.

The last few books have added a layer with paranormal elements with several of the characters having psychic abilities. It’s definitely changed the tone of the series, however, I quite liked the new direction. Miles and Lara’s psychic interaction was definitely a highlight and unique because while do they meet in a dream psychic plane, they also communicate ala psychic SMS texts. That is pretty fitting because Miles is a computer geek and it reflected the nature of his interests and abilities. I loved the imagery and the conversations they had when they were telepathically linked, which included some humorous moments.

I also really enjoyed the romance. This is one of the highlights of the series for me. Miles is more easy-going–although he has grown darker due to the last book, and the toll that took on him. But compared to the other heroes in the series, Miles didn’t seem so alphaholish to the heroine, although there were a few scenes which touched on this, but this is a Shannon McKenna book so it is expected! And I love it!

I found Miles and Lara scenes with each other to be fun and sexy, and the sexual and romantic dynamics is established very well. The sex scenes is a trade-mark of the author; very hot and memorable, which added to their romance. And even though their relationship was rushed, and a suggestion that their psychic bond was helped with other means, I felt this was believable. Although there was an element which made me roll my eyes when Miles and Lara talked about contraception early in the book, and the requisite ‘I am clean but I don’t have condoms’ scenario came up. Lara responded that her cycle stopped because she didn’t have a cycle  due to lack of good food and the torture she underwent. Now I know some women still can get pregnant even without a menstrual cycle BUT I wished this wasn’t used as a reason. It is okay to commence with sex without fear of the future sounds of tiny feet pattering away.

Nonetheless, FATAL STRIKE is a solid romantic suspense with paranormal elements. It was fast paced AND tightly written with a sexy romance, and scorching love scenes. For me it was definitely one of the best books in the series and I look forward to the next book in the series!

I give FATAL STRIKE a B- 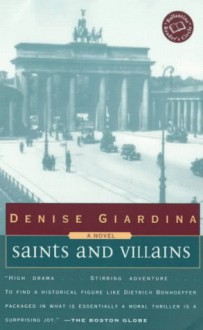 This historical fiction was six years in the making. It is heavy on dialogue between many people that the author could not have interviewed. I would like to believe the dialogue to be accurate but have no way of knowing. Irrespective, the story of premier 20th century Lutheran writer is very compelling. It shows Bonhoeffer and his religious struggles.
More posts
Your Dashboard view:
All Reviews Text Photo Quote Video URL Activities
Liked posts Top Tags
Press About Terms of Services Privacy Policy Contact Us Blog FAQ Patronaty medialne BookLikes for Authors Partners panel more...
Team Themes Docs API Blogs
Copyright © 2021 BookLikes