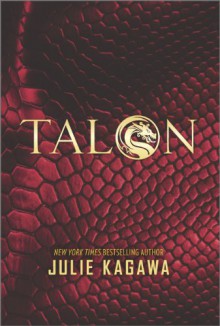 Long ago, dragons were hunted to near extinction by the Order of St. George, a legendary society of dragon slayers. Hiding in human form and growing their numbers in secret, the dragons of Talon have become strong and cunning, and they're positioned to take over the world with humans none the wiser.

Ember and Dante Hill are the only sister and brother known to dragonkind. Trained to infiltrate society, Ember wants to live the teen experience and enjoy a summer of freedom before taking her destined place in Talon. But destiny is a matter of perspective, and a rogue dragon will soon challenge everything Ember has been taught. As Ember struggles to accept her future, she and her brother are hunted by the Order of St. George.

Soldier Garret Xavier Sebastian has a mission to seek and destroy all dragons, and Talon's newest recruits in particular. But he cannot kill unless he is certain he has found his prey—and nothing is certain about Ember Hill. Faced with Ember's bravery, confidence and all-too-human desires, Garret begins to question everything that the Order has ingrained in him—and what he might be willing to give up to find the truth about dragons.
show less
Format: hardcover
ISBN: 9780373211395 (0373211392)
Publish date: 2014-10-08
Publisher: Harlequin
Pages no: 464
Edition language: English
Category:
Fantasy, Young Adult, Paranormal, Dragons
Series: Talon Saga (#1)

Living for the Books rated it

4 years ago
http://livingforthebooks.booklikes.com Living for the Books 3.0 Talon by Julie Kagawa
text Talon by Julie Kagawa
I've been a long time fan of Julie Kagawa and honestly I'm pretty disappointed by this. I was expecting something amazing, especially because I loved her Blood of Eden series. If you want to see Kagawa at her finest I'd skip Talon and read The Immortal Rules. Now, this book wasn't terrible by any ...
See review

6 years ago
http://dawnsingh.booklikes.com D M Singh Book Blog 4.0 DRAGONS ....
text DRAGONS ....
At first the whole dragons living as humans seemed a little far-fetched but Julie Kagawa seems to be able to pull anything off, from vampires to fey to dragons and she does is so well. Ember is a fabulous character, who I immediately identified with. I think young readers will recognise themselves i...
See review

6 years ago
http://BagEndBooks.booklikes.com BagEndBooks 3.0 Talon
text Talon
I enjoyed the book. The story was very good, and I liked most of the characters. I didn't really like having chapters from Riley's point of view. I really hate love triangles. Ember's romance with Garret was a fairly typical teen romance, it was cute, and I enjoyed it, but even forgetting all the co...
See review

6 years ago
http://hopelessbibliophile.booklikes.com Jessica (HDB) 1.0 DNF @ 70%.
text DNF @ 70%.
And... I'm done. I know, I know. You'd think that after making it this far I would just go ahead and finish up, right? I planned on it. I did. Despite the teen angst, the love triangle, and the so far uninteresting dragons that populate this book I really wanted to at least see how it ended. I can...
See review