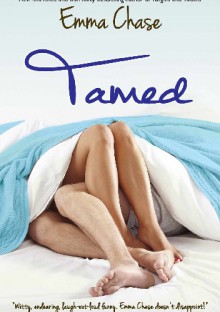 Stop me if you’ve heard this one before: girl meets player, they fall in love, player changes his ways.

It’s a good story. But it’s not our story. Ours is a lot more colorful.

When I met Dee, I knew right away that she was special. When she met me, she thought I was anything but special—I was exactly like every other guy who’d screwed her over and let her down. It took some time to convince her otherwise, but it turns out I can make a convincing argument when sex is at stake.

You might know where this story’s headed. But the best part isn't where we ended up.

It’s how we got there.

4 years ago
http://RachelGoodbyeBorders.booklikes.com Rachel's books 3.0 Tamed
text Tamed
Having read the first 2 (Tangled and Twisted), I was interested in reading Matthew's and Dee's (Delores) story. I knew they were a couple and got married, but I was interested enough to want to read their story (and Matthew is not Drew). Like every couple, they have their Issues. Dee, I think, more ...
See review

6 years ago
http://Dawn772.booklikes.com Dawn772 5.0
text
A funny steamy first person story told from the hero's point of view. This rich New York playboys ideas on relationships were entertaining and at the same time he puts himself out there to take the risk for happily-ever-after. Matthew tells the story of how he and Dee fell in love.
See review

7 years ago
http://jonetta.booklikes.com Blue Mood Cafe 4.0 Another player bites the dust
text Another player bites the dust
All I've known about Matthew Fisher is that he's Drew's best friend and he was seeing Dee Dee. I assumed he was a player given Drew's history. He is somewhere in that zone but I contend that he was just waiting for "the one" after having been once burned. Matthew is a lot more interesting than wha...
See review

7 years ago
http://Cupcakegirly.booklikes.com Jenuine Cupcakes 4.0 Great addition to the series!
text Great addition to the series!
*Due to the content this isn't recommended for readers under 18.*Story: This series has quickly become my guilty pleasure because it's one of the most authentic male POVs I've come across. Even though I liked them as side characters, I wasn't sure how invested in Matthew and Delores' story I would b...
See review
see community reviews