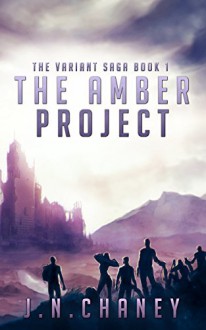 Terry is one of these children, modified and trained to endure the harsh conditions of a planet he cannot begin to understand. After years of preparation, Terry thinks he knows what to expect. But the reality is far stranger than anything he can imagine—and what he will become is far more dangerous.

Interview with the Author:

Q: Is this book part of a series?

A. Yes, the Amber Project is part 1 of the Variant Saga, a series of dystopian young adult novels.

Q: What sort of genres do you typically read? Are they the same as what you write?

A. I read a lot of science fiction, but not as many apocalypse books as people think. The Amber Project is dystopian scifi, but I don't normally read a ton of that. My favorite books are Ender's Game, Old Man's War, The Great Gatsby, Paradise Lost, Cat's Cradle, Sirens of Titan, and The Gunslinger. A few of those influenced this book, but not all. A lot of my influences came from other forms of entertainment, like films and video games. I grew up playing games like Fallout and Bioshock, so there's plenty of influences there.

Q: Will there be other books in this universe besides the main series?

A: Yes. I'm planning a few spin-offs as well as several short stories.

Q. So why should readers give this series a try?

A: Because the Variant Saga is a fast, fun, thrill-ride! It dives into genetic engineering and child soldiers, tackling serious issues and themes, and provides a rich, explosive world of exploration.

Ultimately, readers who enjoy lightning-fast pacing with a plot that twists and turns all the way to the end will get a kick out of this series.

Q: Where can readers learn more about upcoming releases?

5 years ago
http://susanvoss18.booklikes.com susanvoss18 4.0 The Amber Project by JN Chaney
text The Amber Project by JN Chaney
This dystopian young adult novel is set in 2157 somewhere near the Atlantic coast. Terry and his classmates are growing up in an underground city. The surface of the planet became contaminated years ago by a mysterious and deadly gas named Variant. The city is slowly falling apart; the surface must ...
See review

5 years ago
http://empressreece.booklikes.com Hooked on Books 5.0 A Fantastic Indie Author...
text A Fantastic Indie Author...
The Amber Project is the first book in, Indie author, J.N. Chaney's, Variant Saga series. I really hadn't heard much about Chaney until recently so I wasn't sure what to expect going into it but I was very pleased with the story. It's a dystopian story about survivors that have been forced to live i...
See review
see community reviews

The Other Side of Nowhere: And Other Sto...