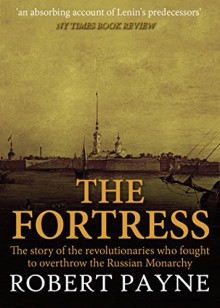 It describes the century-long struggle (from 1825 – 1917) of the great Russian revolutionaries to overthrow the monarchy.

Their punishment was to be thrown into the Peter and Paul Fortress in Leningrad, then the most dreaded of Russian prisons and a symbol of Tsarist cruelty, where they were tortured and sometimes beaten to death, or left to rot in the silence of their cells.

Who were these revolutionaries?

They included such figures as Pushkin, the aristocratic Decembrists (who attempted a coup d'etat against the Tsar as early as 1825), Dostoyevsky (who was forced to suffer a mock execution after joining the Petrashevsky group), Bakunin (the great anarchist), Nechayev (the terrorist youth who became the hero of ‘The Possessed’), Zhelyabov (who engineered the assassination of Alexander II), Sazonov (who masterminded the murder of the brutal Minister of the Interior, Plehve), and Kaliayev (the poet who killed the Grand Duke Sergey.

They were idealists, they were ruthless terrorists but Payne also shows their human qualities. They come alive in graphic detail, as do the terrible horrors of torture and being left to go mad in prison.

Vivid, fast-paced ‘The Fortress’ is the powerful story of these Russian revolutionaries who fought for a greater freedom and unwittingly opened the way for a greater tyranny – the Bolshevik Revolution.

‘an absorbing account of Lenin’s predecessors … in Mr. Payne’s skilful hands these young idealists come alive in all their pathetic grandeur, while the tales of their intrigues and repeated self-sacrifice make fascinating reading’ – New York Times Book Review

‘Mr. Payne … again displays his gift as a chronicler of the past in terms of personality, drama and contemporary detail’- Book-of-the-Month-Club News

"Mr. Payne is a literary phenomenon of astounding industry and versatility." The New York Times

Robert Payne (1911-1983) had over a hundred books published on a wide range of subjects during his lifetime. Critics raved about ‘his vast erudition,’ ‘his magic power over words,’ and that rare ability ‘to capture the spiritual essence of his subject.’ The Russian series, in particular ‘The Life and Death of Lenin’ and ‘The Rise and Fall of Stalin’, raised his reputation as biographer to enormous stature.

Endeavour Press is the UK's leading independent digital publisher. For more information on our titles please sign up to our newsletter at www.endeavourpress.com. Each week you will receive updates on free and discounted ebooks. Follow us on Twitter: @EndeavourPress and on Facebook via http://on.fb.me/1HweQV7. We are always interested in hearing from our readers. Endeavour Press believes that the future is now.
show less
Format: Kindle Edition
ASIN: B00Y2TGQT4
Publish date: 2015-05-21
Publisher: Endeavour Press
Pages no: 513
Edition language: English

The Splendor of France - Pierre Stephen ...

Lost Treasures of the Mediterranean Worl...