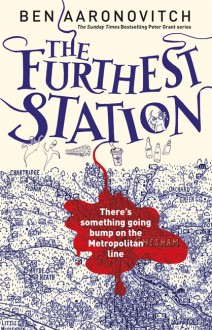 Only it's more than going 'bump'. Traumatised travellers have been reporting strange encounters on their morning commute, with strangely dressed people trying to deliver an urgent message. Stranger still, despite calling the police themselves, within a few minutes the commuters have already forgotten the encounter - making the follow up interviews rather difficult.

So with a little help from Abigail and Toby the ghost hunting dog, Peter and Jaget are heading out on a ghost hunting expedition.

1 year ago
http://LoraHatesSpam.booklikes.com Lora Hates Spam 4.5 The Furthest Station
text The Furthest Station
by Ben Aaronovitch This seventh book in the Rivers of London series is shorter than the others, just over 100 pages. I was pleased to be dealing with ghosts again as they have a lot of scope for interesting situations and glimpses of history. I also enjoyed the return to dealing a little with ri...
See review

2 years ago
http://Darthpony.booklikes.com Darth Pedant 3.5 The Furthest Station (Peter Grant #5.5)
text The Furthest Station (Peter Grant #5.5)
This novella somehow managed to simultaneously deliver a full story with a satisfying conclusion and leave me feeling like it was way too short. It was good to see Nightingale out in the field again, however briefly, and Abigail is really growing on me. Beverly makes an appearance, and Peter remembe...
See review

2 years ago
http://oblue.booklikes.com Abandoned by Booklikes 4.0 A Nice Peek at Peter & Nightingale
text A Nice Peek at Peter & Nightingale
Well this was a nice look into Peter and Nightingale that for once did not involve The Faceless Man or Lesley. There is still something hovering over this book though that makes me think they may be trying to turn or did turn another character to their side and that's getting a bit old to me. We do ...
See review

3 years ago
http://wyvernfriend.booklikes.com Wyvernfriend Reads 4.0 Sounds in the underground
text Sounds in the underground
Peter Grant has to investigate reports of ghosts on the metropolitan line, he's stymied by the fact that people forget the event shortly after it happens but there's something not right going on, his cousin is also getting caught up in the entire supernatural stuff.It's entertaining and will keep me...
See review

4 years ago
http://Burgoo.booklikes.com Burgoo 5.0
text
This is less about BIG IMPORTANT STUFF and more about just hanging out with the characters. I thought there was an underlying silver age vibe to all of this. Very enjoyable for what it is.
See review
see community reviews