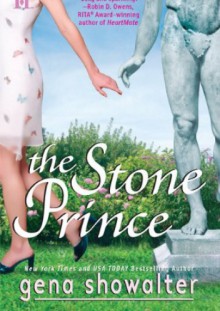 Katie James is unlucky in love—so unlucky she's been reduced to kissing the marble statue in her own garden. But her luck changes when the statue warms to life in her arms—and turns out to be a hunk straight out of any woman's fantasy! Well, almost...Jorlan en Sarr hails from a distant planet, and, like all the other men Katie's known, he comes with a lot of baggage.

A cursed warrior with a lover's magic touch...

Entombed in his stony skin for centuries, Jorlan has been waiting for a maiden fair to break the spell. Yet this statuesque beauty with the will of an Amazon and kisses like flame is a far cry from the obedient damsels of Imperia. And though Jorlan is tempted to abandon all for the sake of Katie, unless he can convince her to give him her heart in two weeks' time, he'll be turned back to stone. And she'll be lost to him forever.
show less
Format: papier
ISBN: 0373770073
Publish date: wrzesień 2004 (data przybliżona)
Publisher: HQN Books
Pages no: 368
Edition language: English
Category:
Fantasy, Magic, Paranormal, Science Fiction, Romance, Paranormal Romance, Adult, Contemporary Romance, Contemporary, Aliens, Fantasy Romance
Series: Imperia (#1)

1 year ago
http://bookjunkie57.booklikes.com bookjunkie57 0.0 The Stone Prince
text The Stone Prince
Imperia , Book 1 I Picked Up This Book Because: #Barbsbookopoly roll 4. “An author's debut” The Characters: Katie James: Jorlan en Sarr: The Story: Look I know this dude isn’t from modern earth and this was written quite some time ago but I can’t stand him. Excuse my language but his “I have ...
See review

8 years ago
http://lostinadream.booklikes.com lostinadream 4.0
text
Okay I really enjoyed this book, Jorlan was an incrediable alpha male and Katie was a stand alone heroine. I enjoyed the alien aspect to it. My heart bled for Percen and I was glad he got the ending he needed.Katie's family was defiantly intriguing, and led to several laughs.
See review

10 years ago
http://Dawn772.booklikes.com Dawn772 2.0 The Stone Prince
text The Stone Prince
I just could not get into this paranormal story and didn't finish. Not much action, mostly debate about having sex and I couldn't determine if his technology was advanced or primitive. Katie is taken by a statue in her garden and when she gives it a kiss it comes alive into a man named Jorlan.
See review

11 years ago
http://redhotbooks.booklikes.com Red Hot Books 3.0
text
Gena Showalter's The Stone Prince is the first of her Imeperia novels. Our hero is Jorlan, an alien warrior, trapped by his brother in a statue and sent to Earth. He is cursed to remain in stone until released by a woman's kiss. But even then, his reprieve will last only a couple of weeks, unless th...
See review

11 years ago
http://LoverofRomance.booklikes.com Addicted To Romance 4.0 The Stone Prince
text The Stone Prince
Katie James, having recently gotten her hands on a home to be refurbished, including a garden with a beautiful marble statue of a man that tempts her. But she starts hearing a tempting voice to kiss the statue so she does, and finds herself kissing a real life breathing man that is pure woman's fant...
See review
see community reviews