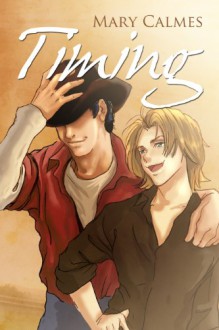 Stefan and Rand have been mortal enemies since the day they met, so Stefan is shocked when a temporary cease-fire sees the usual hostility replaced by instant chemistry. Though leery of the unexpected feelings, Stefan is swayed by a sincere revelation from Rand, and he decides to give Rand a chance.

But their budding romance is threatened when Stefan’s business deal goes wrong: the owner of the last ranch he needs to secure for the company is murdered. Stefan’s in for the surprise of his life as he finds himself in danger as well.

5 years ago
http://pandabrrbooks.booklikes.com Pandabearbooks 3.0 Timing
text Timing
Stef was a really fantastical character, which really made the whole story a little ridiculous. No body is that perfect yet conflicted at the same time. I get that you wanna make a character flawed, but in doing so you gotta take into consideration the effect those flaws will have on the character o...
See review

5 years ago
http://karlakolumna.booklikes.com karlakolumna 1.0 Timing
text Timing
More detailed review to come.Because. Boyoy. There are so many things wrong with this book. Over the top, past and beyond belief, a ton of clichés, ridiculous characters and overall plot.And while reading it I actually marked passages and made notes on my Kindle! Which I never ever do. So that right...
See review

6 years ago
http://SusanReads.booklikes.com Susan 4.0 Timing
text Timing
BR with bestie ElsbethA few things I learned after reading a few Mary Calmes books.- Mary Calmes does NOT like condoms. I’m sure she has a latex allergy or she is traumatized by a bad experience. Because no one is using them in her books. There is always some excuse as to why they should skip it, ev...
See review

6 years ago
http://Elsbeth66.booklikes.com ~~ Elsbeth ❤❤❤ MM-Romance ~~ 4.0 Timing
text Timing
BR, June 20th with SusanOoh my goodness, you sure going have to be in the right sort of mood to read this because this was totally unbelievable and cheesy as hell. But I loved it. ♡♡♡Sometimes it’s just what you need.. A story to pull ourselves out of our RL.Rand was the typical hot alpha cowboy, ow...
See review

6 years ago
http://hushabyebooks.booklikes.com Hushabyebooks 4.0 Timing
text Timing
"Scream my name, Stef... scream loud."My first Mary Calmes. I think I picked a good one because... RAND!!! I have a bit of a cowboy thing and Rand is the perfect cowboy and he owns being awesome and hot and bossy and hot and just unf...Yeah it's a bit silly and Stef doesn't always come across well b...
See review
see community reviews