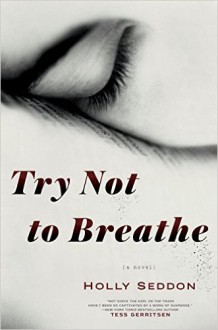 Try Not to Breathe: A Novel
by: Holly Seddon (author)

Some secrets never die. They're just locked away.

Alex Dale is lost. Destructive habits have cost her a marriage and a journalism career. All she has left is her routine: a morning run until her body aches, then a few hours of forgettable work before the past grabs hold and drags her down. Every day is treading water, every night is drowning. Until Alex discovers Amy Stevenson. Amy Stevenson, who was just another girl from a nearby town until the day she was found after a merciless assault. Amy Stevenson, who has been in a coma for fifteen years, forgotten by the world. Who, unbeknownst to her doctors, remains locked inside her body, conscious but paralyzed, reliving the past.

Soon Alex's routine includes visiting hours at the hospital, then interviews with the original suspects in the attack. But what starts as a reporter's story becomes a personal obsession. How do you solve a crime when the only witness lived, but cannot tell the tale? Unable to tear herself away from uncovering the unspeakable truth, Alex realizes she's not just chasing a story—she's seeking salvation.

Shifting from present to past and back again, Try Not to Breathe unfolds layer by layer until its heart-stopping conclusion. The result is an utterly immersive, unforgettable debut.

Advance praise for Try Not to Breathe

5 years ago
http://Jordash207.booklikes.com Read With ME (207) 4.0 Try Not to Breathe: A Novel
text Try Not to Breathe: A Novel
I've heard so many new thrillers/suspense novels being compared to The Girl on the Train (or Gone Girl), lately, that I don't even take the comparison seriously anymore BUT I think it's safe to assume that if you liked the one than you will like the other as well. This reminded me so much of "TGOTT"...
See review

5 years ago
http://Yzabel.booklikes.com Yzabel 2.5 Try Not To Breathe
text Try Not To Breathe
[I received a copy of this book through NetGalley, in exchange for an honest review.]An OK read, though I wouldn't go further than that. I could guess easily enough who the culprit was (there are plenty of hints if you pay attention), and while chasing those was fun, in retrospect, there weren't man...
See review

5 years ago
http://maddan3.booklikes.com It's a Mad Mad World 3.0 Try Not to Breathe by Holly Seddon
text Try Not to Breathe by Holly Seddon
Amy Stevenson was attacked 15 years ago and have ever since been in a coma. No one has been caught for the brutal attack. Alex Dale was once a loving wife, a mother to be and a brilliant journalist. Now she has nothing left. But, then she does an interview with a doctor about coma patients and meets...
See review

5 years ago
http://Denise.booklikes.com Denise 3.0 Try Not to Breathe
text Try Not to Breathe
Time is not a good healer. Time is a blank page on which the left behind scribble their regrets and their confessions. I really had high hopes for this book as the premise really intrigued me. While I did enjoy reading this book at times it was pretty frustrating when I was able to figure out what ...
See review
see community reviews

Try Not to Breathe - Holly Seddon