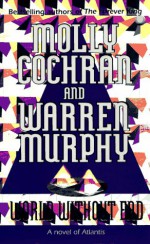 2 years ago
text A MG Version of Great Book about Man's Best Friend
I wasn't sure what to expect from a Young Reader's Edition of this book, was it going to be dumbed down? Was it going to be a soup-to-nuts rewrite of the book, telling the story in a cutsie fashion? Or . . . well, I don't have a third idea, but you get my opinion. But what we got was the same book (...
See review

6 years ago
text
Arthur is looking for his aunt but is with Hal who is his protector. Then a beggar comes to his hotel door with a girl and she has the cup they have been looking for. The girl is Beatrice and she has been blind since birth but the cup gave her sight, but her grandmother was killed by a man after the...
See review

7 years ago
text Lobo's Howliday
I have notice with C.L. Murphy's books the illustrations is bright and festive. The colorful scene of the Northern lights brilliantly light up this story. A short read, just enough for a child to grasp this festive read. I thoroughly enjoy the arctic animals accompanying a wolf pup name Lobo on hi...
See review

7 years ago
text
I received a copy of this book from the publishers and this is my honest review. Remo Williams finds himself transformed from street cop to death row inmate. He's been set up for a crime he didn't commit and doesn't know why. All he knows is that he's been sentenced to death and is sat waiting to ...
See review

8 years ago
text
Hal was a fantastic FBI agent, but after a child died during one of his cases, he left the bureau and became an alcoholic mess. Arthur was just a bright but ordinary boy until he discovered a strange metallic cup. A serious of coincidences and the dastardly deeds of the immortal Saladin bring them...
See review
see community reviews
Need help?