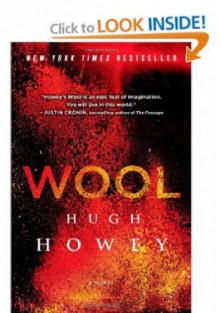 In a ruined and toxic future, a community exists in a giant silo underground, hundreds of stories deep. There, men and women live in a society full of regulations they believe are meant to protect them. Sheriff Holston, who has unwaveringly upheld the silo’s rules for years, unexpectedly breaks the greatest taboo of all: He asks to go outside.

His fateful decision unleashes a drastic series of events. An unlikely candidate is appointed to replace him: Juliette, a mechanic with no training in law, whose special knack is fixing machines. Now Juliette is about to be entrusted with fixing her silo, and she will soon learn just how badly her world is broken. The silo is about to confront what its history has only hinted about and its inhabitants have never dared to whisper. Uprising.

2 years ago
http://lqlarry.booklikes.com lqlarry 4.0 Wool (Omnibus Edition) by Hugh Howey
text Wool (Omnibus Edition) by Hugh Howey
This is a book I saw on a list of the "Best Science Fiction of the 21st Century" on that other website so I chose to read it blindly, without any idea what it was about. I read the first chapter and it was really written okay, and then the second chapter made me think 'am I wasting my time reading ...
See review

5 years ago
http://claireh18.booklikes.com Claire loves to read! 3.0 Review: Wool (Wool trilogy #1) by Hugh Howey
text Review: Wool (Wool trilogy #1) by Hugh Howey
Published by: Arrow (25 April 2013) ISBN: 978-0099580485 Rating: 3* Synopsis: In a ruined and hostile landscape, in a future few have been unlucky enough to survive, a community exists in a giant underground silo. Inside, men and women live an enclosed life full of rules and regulations, of se...
See review

5 years ago
http://Shiftyj1.booklikes.com Shiftyj1 3.0 Wool Omnibus (Silo, #1)
text Wool Omnibus (Silo, #1)
The outside world is uninhabitable. To even speak of it is forbidden. Humanity has been reduced to a single silo buried underneath a wasteland of death and despair. 3 sections, 48 floors each, hundreds of feet below the surface. That’s it. The only thing buried deeper, in this apocalyptic landscape,...
See review

5 years ago
http://erichey.booklikes.com Emma Richey 5.0 Old McDonald Had A...S-I-L-O.
text Old McDonald Had A...S-I-L-O.
E-I-E-I-Oh...you weren't kidding. At some point in history, Old McDonald's farm must have not gone so well, because all he ended up with in the end was a silo. Props to whoever advised him to keep the silo, though, because it sure came in handy [spoiler] when the air got poisoned and the world bec...
See review
see community reviews