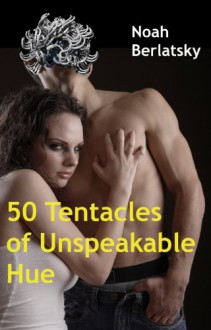 3900 words of heaving bosoms, thrashing tentacles, thrashing bosoms and heaving tentacles, as well as passionate wounded men spurting forth sincere capital. Also possibly hideous and explicit perversions. Be warned!
____
He crossed his arms on his magnificent chest. "Please," he said. "I know we are all sensitive people, and that we have so much to give. But this is an emergency. Your safety is in peril." He came around the desk. I caught my breath. My bosom heaved without my knowing it. "Your hymen," he said. "I need to know its status. Now."

Something in his tone, something in his assurances, assured me. "Yes. I…I'm a virgin," I admitted. "My hymen is intact." I lowered my eyes. "It's probably because I am so unconscious of my extreme beauty that things have come to this pass," I said apologetically.

His jaw, which I was sure had tightened as much as it was possible for a jaw to tighten, tightened further. "I would curse your demure and improbable lack of self-knowledge," he said, "if it were not so endearing. And even then, perhaps, if we had time. But we've got to get you out of here!"

He grabbed me roughly and lifted me from the chair, propelling me towards the door with strong, strong, knowing hands.

We stepped through the office door and my half-formed thought choked and died and ceased to form.

Virginia was braced against her desk, her arms rigid. Her skirt was hiked up around her waist. Her spectacular ass bucked and thrust rhythmically, in time to the thrusts of…oh my.

It was man-like, to some degree. Two arms, two legs. At first I thought it was a guy in a costume, which clearly would not have been appropriate for the office, anyway, but still. After a couple seconds, though, I saw the proportions were not quite right. It looked sort of like that black lagoon creature; it was obviously aquatic. Its webbed, green-black hands were wrapped around her hips; the frills at its neck quivered in eagerness or satisfaction or anger, or just to quiver, who knew? Though a virgin, I was not utterly without experience, and so I could tell that its penis was thoroughly unlikely, if not actually impossible.
show less
Format: kindle
ASIN: B00E9CSQAQ
Pages no: 15
Edition language: English

The Fangirl rated it

8 years ago
http://TheFangirl.booklikes.com The Fangirl 3.0 50 Tentacles of Unspeakable Hue by Noah Berlatsky
url 50 Tentacles of Unspeakable Hue by Noah Berlatsky
A 50 Shades/Cthulhu mash-up. You can read it here for free. I can't stop laughing at the cover. “Hello, Miss Irons,” he said, his voice cultured and bristling manfully with manliness. “Hello,” I said vaguely. Everything tilted, and I pitched forward helplessly. Two of the three grapes I had e...
See review
see community reviews