Adele Parks
Adele Parks one of the most-loved and biggest-selling women's fiction writers in the UK. She has sold over 3 million books and her work has been translated into 25 different languages.1500+ 5 star reviews have kindly been written by her fans on Amazon.co.uk :-)She has published 15 novels in the... show more

Adele Parks one of the most-loved and biggest-selling women's fiction writers in the UK. She has sold over 3 million books and her work has been translated into 25 different languages.1500+ 5 star reviews have kindly been written by her fans on Amazon.co.uk :-)She has published 15 novels in the past 15 years, all of which have been London Times Top Ten Bestsellers.Adele was born in the North East of England, in 1969. She enjoyed a traditional 1970's childhood, watching too much TV and eating convenience food because nobody minded if kids did that in those days. Since graduating from university, where she studied English Language and Literature, she worked in advertising and as a management consultant. In 2010 Adele was proud to be awarded an honorary doctorate of Letters from Teesside University. 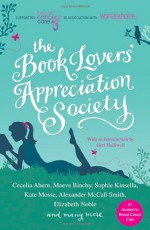 2 years ago
text Dazzled by Fame
Popular author Adele Parks examines the over-glamorization of wealth and fame, and the consequences of family secrets in I Invited Her In, a novel released in early 2019. When Melanie is contacted out of the blue after sixteen years by her now-famous friend from University, she is thrilled but unea...
See review

6 years ago
text Brace yourself
Brace yourself for a roller coaster of emotions with this one. I spent most of the book being angry with Jo (there’s ditzy romantic and then there’s plain stupid…really!), feeling sorry for Dean and Clara (yes, I couldn’t stop myself from liking her), rolling my eyes at the absurdity of Eddie’s exis...
See review

6 years ago
text What happens to the women left over after The Great War?
This is a fascinating era, still reeling from the impact of the first world war, where so many young men were lost or maimed. The four main characters are all well-to-do ladies who are trying to pick up the pieces of their lives and live with the devastation of The Great War. Sarah and Beatrice (B...
See review

8 years ago
text Whatever It Takes [Hardcover]
Unfortunately, the title seems to be more the aim of the book. Move to the country. A demanding mother in law. A friend who is trying to give birth. Yup. It ticks all the boxes. Are there people ( not including those who gets free ARCs) who would pay good money to read this drivel again and again?
See review

9 years ago
text About Last Night
I've read a couple of Adele Parks books and I was really looking forward to this one. Unfortunately I felt let down. I found a lot of the narrative unnecessary. I give up on books very rarely but I got halfway through and completely lost interest. I was skipping over a lot of the descriptive text as...
See review
see community reviews
Need help?