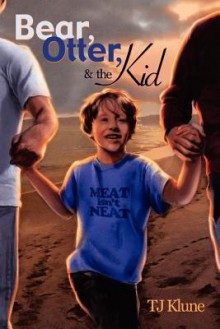 Otter is Bear’s best friend’s older brother, and as they’ve done for their whole lives, Bear and Otter crash and collide in ways neither expect. This time, though, there’s nowhere to run from the depth of emotion between them. Bear still believes his place is as the Kid’s guardian, but he can’t help thinking there could be something more for him in the world... something or someone.
show less
Format: ebook
ISBN: 9781613720882 (1613720882)
Publish date: August 12th 2011
Publisher: Dreamspinner Press
Pages no: 350
Edition language: English
Category:
Childrens, Humor, Funny, Romance, Family, Contemporary Romance, Contemporary, Glbt, M M Romance, Gay, Gay Romance, Gay For You
Series: Bear, Otter, and the Kid (#1)

4 years ago
http://Bookfanatic55.booklikes.com ...Bookfanatic 5.0 Just because I could...
text Just because I could...
A while ago I decided to treat myself to one of my favorite series on audio book and that's how I came to listen to 'Bear, Otter and the Kid' I just needed to listen to something that I could enjoy and I liked and this series pushed all the right buttons. "Bear, Otter and the Kid" is narrated by ...
See review

5 years ago
http://pandabrrbooks.booklikes.com Pandabearbooks 4.0 Bear, Otter, and the Kid
text Bear, Otter, and the Kid
I'm guessing this is one of Klune's earlier books. Of all I've read from him, this was my least favorite. Which isn't saying this was bad by any means, just that Klune's gotten a lot better over the years.The characters are amazing as are the relationships (mostly) but this one had quite a few too m...
See review

5 years ago
http://BrittaNachteule.booklikes.com My Kindle is my TARDIS 5.0
text
So I read those treasures back to back... Since I read Tell Me It's Real last year I wanted to read more books by T.J. Klune. I loved his humor. Now with Bear, Otter and Tyson (who isn't any longer the Kid) and their chosen family he absolutely got me under his spell! The angst!!! The love!...
See review

5 years ago
http://hushabyebooks.booklikes.com Hushabyebooks 5.0 Bear, Otter, and the Kid
text Bear, Otter, and the Kid
1st read - 11 January to 13 January (4 stars)2nd reread/listen - 21 March to 7 April 2016 (5 stars)Wow!! I really loved the audio of this. So much so that I need to add another star and add to my favourites shelf for 2016. Funnily enough the things I wasn't mad on, Otter's flashback in particular, r...
See review
see community reviews