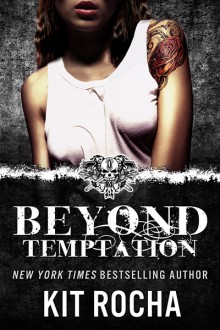 Beyond Temptation
by: Kit Rocha (author)

Or so he thought.

Emma Cibulski has made her own home in Sector Four, as a full member of the O’Kane gang and apprentice to their infamous tattoo artist. When Noah--the first man she ever loved--stumbles back into her life, it’s her chance to have it all. The spark between them burns hotter than ever, and this time her fantasies are far from innocent.

But can they handle the heat...or will Noah’s dark secrets drive them apart forever?

3 years ago
http://beyondstrangenewwords.booklikes.com Beyond Strange New Words 3.0 Beyond Temptation
text Beyond Temptation
I wasn't that interested in this one, mostly because I was in a hurry to get to the next book. But it was a good story, too, and there was some interesting new information on the history of this universe and the sectors' working. And I liked getting to know Noah and Emma.
See review

6 years ago
http://MaggieReads.booklikes.com Maggie Reads Romance 4.0 Beyond Temptation
text Beyond Temptation
Loved Noah and Emma's story. The shortness of the story took absolutely nothing away from the fabulousness of thisfavorite series. Each installment reaffirms my love for the world, the writing, the characters and the sexiness of the Beyond Series.
See review

6 years ago
http://ToniFGMAMTC.booklikes.com Fangirl Moments and My Two Cents 3.0 Beyond Temptation
text Beyond Temptation
This is just a novella, but I feel that it is a wealth of knowledge about the series. There is so much background information, more than in some of the other books. It has the sex and the couples struggles course, but connecting the facts from this with the facts of the others comes together so ni...
See review
see community reviews