F. Paul Wilson
I was born toward the end of the Jurassic Period and raised in New Jersey where I misspent my youth playing with matches, poring over Uncle Scrooge and E.C. comics, reading Lovecraft, Matheson, Bradbury, and Heinlein, listening to Chuck Berry and Alan Freed, and watching Soupy Sales and horror... show more

I was born toward the end of the Jurassic Period and raised in New Jersey where I misspent my youth playing with matches, poring over Uncle Scrooge and E.C. comics, reading Lovecraft, Matheson, Bradbury, and Heinlein, listening to Chuck Berry and Alan Freed, and watching Soupy Sales and horror movies. I sold my first story in the Cretaceous Period and have been writing ever since. (Even that dinosaur-killer asteroid couldn't stop me.)I've written in just about every genre - science fiction, fantasy, horror, young adult, a children's Christmas book (with a monster, of course), medical thrillers, political thrillers, even a religious thriller (long before that DaVinci thing). So far I've got about 55 books and 100 or so short stories under my name in 24 languages. I guess I'm best known for the Repairman Jack series which ran 23 novels. Jack is out to pasture now, but I may bring him back if the right story comes along.THE KEEP, THE TOMB, HARBINGERS, BY THE SWORD, and NIGHTWORLD all appeared on the New York Times Bestsellers List. WHEELS WITHIN WHEELS won the first Prometheus Award in 1979; THE TOMB received the Porgie Award from The West Coast Review of Books. My novelette "Aftershock" received the 1999 Bram Stoker Award for short fiction. DYDEETOWN WORLD was on the young adult recommended reading lists of the American Library Association and the New York Public Library, among others (God knows why). I received the prestigious Inkpot Award from San Diego ComiCon and the Pioneer Award from the RT Booklovers Convention. I'm listed in the 50th anniversary edition of Who's Who in America. (That plus $3 will buy you a coffee at Starbuck's.)My novel THE KEEP was made into a visually striking but otherwise incomprehensible movie (screenplay and direction by Michael Mann) from Paramount in 1983. My original teleplay "Glim-Glim" first aired on Monsters. An adaptation of my short story "Menage a Trois" was part of the pilot for The Hunger series that debuted on Showtime in July 1997.And then there's the epic saga of the Repairman Jack film. After 20 years in development hell with half a dozen writers and at least a dozen scripts, Beacon Films has decided that "Repairman Jack" might be better suited for TV than theatrical films. (We'll see how that works out.)I've done a few collaborations too: with Steve Spruill on NIGHTKILL, A NECESSARY END with Sarah Pinborough, THE PROTEUS CURE with Tracy Carbone, and the Nocturnia series with Thomas Moneleone. Back in the 1990s, Matthew J. Costello and I did world design, characters, and story arcs for Sci-Fi Channel's FTL NewsFeed, a daily newscast set 150 years in the future. An FTL NewsFeed was the first program broadcast by the new channel when it launched in September 1992. We took over scripting the Newsfeeds (the equivalent of a 4-1/2 hour movie per year) in 1994 and continued until its cancellation in December 1996. We did script and design for MATHQUEST WITH ALADDIN (Disney Interactive - 1997) with voices by Robin Williams and Jonathan Winters, and the same for The Interactive DARK HALF for Orion Pictures, based on the Stephen King novel, but this project was orphaned when MGM bought Orion. (It's officially vaporware now.) We did two novels together (MIRAGE and DNA WARS) and even wrote a stageplay, "Syzygy," which opened in St. Augustine, Florida, in March, 2000. I'm tired of talking about myself, so I'll close by saying that I live and work at the Jersey Shore where I'm usually pounding away on a new novel and haunting eBay for strange clocks and Daddy Warbucks memorabilia. (No, we don't have a cat.) 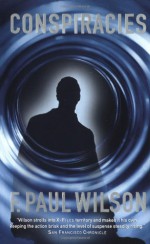 3 years ago
text
well..that's interesting. Granted, I'm not actually familiar with most of the authors...or characters. Not really the genre I follow. I do kinda wish similar existed in romance if only to see how other authors do characters.
See review

4 years ago
text Panacea by F. Paul Wilson - My Thoughts
F. Paul Wilson is a favourite author of a bunch of my friends and one of them recommended Panacea to me, knowing I enjoy a good thriller. And I did enjoy this one. :)It's a typical thriller in that there's a lot of action, a bunch of twisty turny investigations, bad guys with big guns and lots of ...
See review

4 years ago
text The Keep
Was just as scary the second time as the first, however many years have passed between readings.
See review

5 years ago
text Pirates of Venus
Decent pulp sci-fi, but a bit too similar to the John Carter of Mars stories to make it seem like anything special.This is the start of the Carson of Venus series. After his spaceship misses Mars, it avoids crashing into the sun by luckily crashlanding on Venus.Fortunately, the air turns out to be b...
See review
see community reviews
Need help?