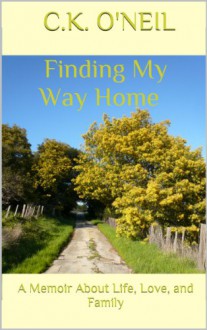 Finding My Way Home  : A Memoir About Life, Love, and Family
by: C.K. O'Neil (author)
on BookLikes:

Though she only physically drove for four weeks taking her 10,000 miles—from Boston across the open lands of the Midwest and through the Northwest region of America down to Los Angeles then back home through the southern states--her travels lead her down a path of self discovery that unveiled the short history of her own life. Alone and fearless of her physical surroundings, her frank conversations with herself caught on tape were more startling than any spooky sounds in the night. As each night passed she was able to sleep more soundly having shed the weight of stored tears. In the privacy of her car, she revealed to her tape recorder her anger, frustration, and sadness.

A high school teacher of English, she has always been a deeply analytical creature craving the rewards of knowledge revealed in the stories of others. Perhaps that is because she has always felt so lost in her own identity. The second of four children, she was never the glimmering star, nor was she ever the black shadow of disappointment cast upon her family. She was mediocre at best, and she was cute enough to get away with not putting forth too much effort in anything. A Protestant growing up in a predominantly Catholic suburb of Boston, she always felt like a religious outcast. Having no talent to speak of, no impressive academic or athletic achievements, and still no period by the time she was fourteen, she entered high school feeling as empty as her new locker on the first day. Though the office provided her with the code to open the locker door, she failed to find the combination to her self esteem. Far from an ‘intellectual’, she delighted more in the social aspects of life and craved more than anything the attention of cute boys. Progressing through high school with mediocre grades, she remained an adolescent thirsting for acceptance from others. Each year she manipulated her way into the ‘in crowd’ and cravenly reshaped her learned values so that she could earn the ‘love’ of a most popular senior boy. From this pattern of self destructive desperation, she suffered some long term, possibly even permanent damages, and its side effects have lingered for over a decade. By the time she had graduated from high school, she naively believed that sex was equal to love, a belief she held on to for many years to come.

It is that very belief that causes the greatest conflict of her journey.

Alone with her music and her journal, she recounts the tales of her family's history evoked by the images of the world around her. An honest and moving story about her version of the truth of who she was, is, and more importantly, who she wants to be.
show less
Format: kindle
ASIN: B00JQMJTFK
Publish date: 2014-04-15
Pages no: 162
Edition language: English