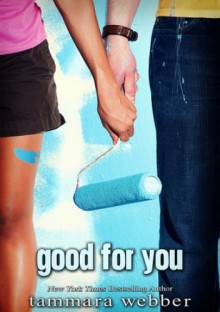 Good For You
by: Tammara Webber (author)

Dori Cantrell is a genuine humanitarian—the outward opposite of everything Reid is about. When his DUI plea bargain lands him under her community service supervision, she proves unimpressed with his status and indifferent to his proximity, and he soon wants nothing more than to knock her off of her pedestal and prove she's human.

Counting the days until his month of service is over, Dori struggles to ignore his wicked magnetic pull while shocking him with her ability to see past his celebrity and challenging him to see his own wasted potential. But Dori has secrets of her own, safely locked away until one night turns her entire world upside down. Suddenly their only hope for connection and redemption hinges on one choice: whether or not to have faith in each other.

Books of Amber rated it

7 years ago
http://booksofamber.booklikes.com Books of Amber 3.0
text
Good For You is a book that I had both been dying to read, and very hesitant about. You see, I have a tendency to grow attached to characters, and I knew that Emma (the main protagonist from the first two books in this series) wasn't going to be the MC in this book. Instead, the focus is on Reid and...
See review

7 years ago
http://tellingmelies.booklikes.com Jenn's Book Jems 5.0
text
“When you finally figure out what you really want, everything else pales in comparison.”Hands down, my favorite book of the series. Tammara Webber, you are my hero. It’s no secret that I love Reid. From the beginning of the series, he just stood out to me. Yes, he was an egotistical, self-centered a...
See review

Stacia in Progress rated it

9 years ago
http://Stacia.booklikes.com Stacia in Progress 3.0 Good For You (Between the Lines #3)
text Good For You (Between the Lines #3)
3.5 stars. I'm so happy that the second half of this book took a turn for the better because I almost wrote off Good For You as being a weak finish to an otherwise cute series. It's not that the first half of the book was bad or even slow. I had no problem sailing through the book and enjoyed the re...
See review
see community reviews