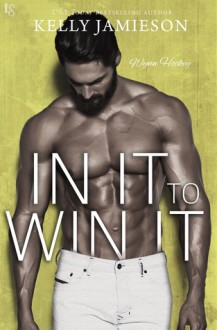 In It to Win It (Wynn Hockey #2)
by: Kelly Jamieson (author)

“Kelly Jamieson is an auto-buy for me.”—Carly Phillips

JP Wynn: I admit, I’ve made some bad choices—on and off the ice.
Now all I want to do is show my team I can control my emotions while I’m playing and redeem myself with my family, especially with my brother, Théo.
I hate that I hurt him and I’m determined to stay out of trouble.
But the hot bridesmaid at Théo’s wedding is tempting me into another bad decision.
A little flirting and a hook up with Taylor seem harmless . . . until Manny Martinez jumps me on the dance floor and starts beating the crap out of me.
And just like that I add one more bad decision to my résumé.

Taylor Hart: I always thought hockey players were hot. Now I think they’re crazy.
Manny broke my heart when he got traded to another team and left without even a goodbye.
Then he showed up at my best friend’s wedding. All I wanted to do was show Manny that I was over him.
And the groom’s sexy brother, JP, seemed more than willing to be my distraction.
But after the way everything went down, I want nothing to do with any of them.
Easier said than done. Especially when Lacey’s new brother-in-law is always around. . . .
And I keep thinking about the wedding night, when we snuck away to his room for the best sex of my life.

USA Today bestselling author Kelly Jamieson’s epic Wynn Hockey series can be read together or separately:
PLAY TO WIN
IN IT TO WIN IT

7 months ago
http://MommaSaysToRead.booklikes.com Momma Says to Read 3.0 Wynn Hockey #2
text Wynn Hockey #2
This second Wynn Hockey romance gives us Taylor and JP, and comes with all the wit and fun that I always love about Kelly Jamieson's books. That said, this one didn't grab me like the author's other books have. It was a bit repetitive and lagged at times, and I get that JP's guilt was a big part of ...
See review

7 months ago
http://2kasmom.booklikes.com Kitty's Book Spot! 4.0 Challenge
text Challenge
This book is #2, in the Wynn Hockey series. This book can be read as a standalone novel. For reader understanding, and to avoid spoilers, I recommend reading this series in order. Jean Paul AKA "JP" is instantly attracted to Taylor. She is everything he can think of that he wants in a woman. O...
See review