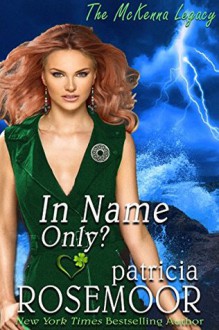 
Excerpt:
“Flanna McKenna, wait a moment.”
Pulse thudding, she stopped and demanded, “And what is it you would be wanting?”
“To talk. About your work for Bridget Rafferty.”
“Unless you represent the authorities, which I doubt with that accent—” he was obviously an American “—I have nothing to say to you.” How would a complete stranger from another land know about her work?
“Michael Eagan, Beacon Hill Investigations.” He flipped open his identification. “It seems your Mrs. Rafferty was the third murder connected to the theft of antique Celtic jewelry in the last month, the first having been in Boston.”
“The third?” Flanna’s mind whirled. “Of course, the other pieces…”
“So you do know something about the murders.”
The way he said it put up Flanna’s back. Another person who thought she was guilty of something? Though she wanted in the worst way to tell him to leave, she couldn’t do it just yet, not until she got the details. She’d not only experienced bad vibes from the pieces she’d replicated, but she’d also had visions of several historical deaths connected to the collection, as well.
She hesitated too long. The front door flew open and there was her mother coming at them, pushing the silver-streaked dark hair from her still pretty face, which was lit by a big welcoming smile.
“You didn’t say a thing about bringing a date, Flanna,” Delia McKenna said, giving her daughter a hug and kiss on the cheek. “And isn’t he a handsome boyo.”
“Ma, please—”
Michael smiled in return and a dimple popped in his right cheek. “Why, thank you, Mrs. McKenna.”
“An American, is it?”
“Irish-American. Michael Eagan. I can see where your daughter gets her beauty.”
Flanna gaped as the private investigator turned on the charm and took her mother’s hand. Her mother actually giggled.
“We’ll be so pleased to have you as our guest.”
“Give us a minute,” Flanna said, biting the inside of her cheek when her mother raised her eyebrows and smiled before retreating to the house. She counted silently to three, then faced Michael. “What do you think you’re doing?”
“Trying to be pleasant to your mother.”
“Now she thinks you and I are—are—”
“Lovers?”
“I was going to say together!”
“You have a problem with intimacy?” One dark eyebrow shot up in challenge.
“I have a problem with you. Perhaps you should leave now and we can meet back in town later.”
“You realize if I don’t come inside with you, you’ll have to explain why.”
He had a point.
show less
Format: kindle
ASIN: B07FV971F2
Publish date: 2018-08-05
Edition language: English
Category:
Romantic Suspense
Series: The McKenna Legacy (#8)