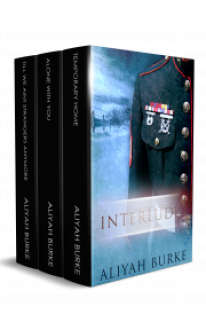 5.00 10
Temporary Home Sometimes past demons need to be faced before one can embrace what the future offers, and who better to slay them than a Marine? Gunnery Sergeant Sam Hoch travels to the Pac Norwest upon receiving word his mentor and the closest thing to a father he's had, has taken a turn for... show more
Temporary Home

Sometimes past demons need to be faced before one can embrace what the future offers, and who better to slay them than a Marine?

Gunnery Sergeant Sam Hoch travels to the Pac Norwest upon receiving word his mentor and the closest thing to a father he's had, has taken a turn for the worse and is in the hospital. Once there he meets a woman who is unlike any he's ever met before. A former Marine herself, she opens up her home to him so he can be near his family.

Roxi Mammon isn't positive it's smart to allow Sam to stay with her, not with her immediate physical reaction to him. She's heard tales of him from her best friend, his sister, and now having met him she is even more impressed by the man the Corps has turned him into—a silent, strong type. Passion grows between them and soon she finds herself falling for the Recon Marine. And falling hard.

As things escalate between them, Sam has to accept his past doesn't control him if he plans on keeping Roxi in his future. Can he understand that this is the one woman who can give him something more? Will he silence the fear within him and tell Roxi she's the one for him? Will he realise that he deserves more than just a temporary home?

A construction worker and a security expert tangle beneath the heated skies of San Antonio.

Pierce ‘Tuck’ Carter has been in love with his neighbour across the hall pretty much since she moved in over there. They’re good friends and do many things together but he wants to take it to the next level. Friends with benefits for starters, then beyond.

Ariel Greene is secretly crushing on her neighbour. One night after drinking she wakes the next morning in his bed and flees. Has she just crossed a line they can’t recover from?

Tuck pursues her, wanting more, however one of his exs, each of their jobs and his intense dislike of her putting herself in danger doesn’t make the road an easy one. Will Ariel and Tuck learn to work it all out before something else happens, or will it take the near loss of one to make the other realise what had almost been lost forever?

Till We Ain't Strangers Anymore

Sometimes a stranger isn’t a stranger at all, but the one you’ve needed all along.

Brent ‘Killer’ Agers is on leave. He needs to heal up and is tired of dealing with stuff around him so he takes a drive, ending up in Haversham, MT, deciding to rent a cabin and recover that way. Little does he know that the woman he couldn’t get out of his mind will be in his life once more.

Maya Brennan is content with her life running the local Bait & Tackle shop. Everything was going according to plan until the day he walked into her office looking to rent a cabin.

5 months ago
http://debbieattenborough.booklikes.com debbiereadsbook 5.0 I LOVED THESE!!!
text I LOVED THESE!!!
Independent reviewer for Archaeolibrarian, I was gifted my copy of this box set of three books. Because I read these books back to back, as a set, I’m writing one review for the whole bundle, rather than three separate reviews. And let me tell ya, I loved these books! Well, I LOVED books one and thr...
See review
see community reviews