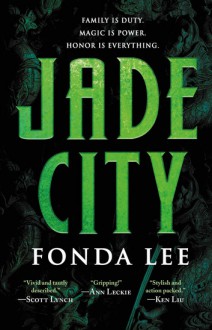 FAMILY IS DUTY. MAGIC IS POWER. HONOR IS EVERYTHING.

Jade is the lifeblood of the island of Kekon. It has been mined, traded, stolen, and killed for -- and for centuries, honorable Green Bone warriors like the Kaul family have used it to enhance their magical abilities and defend the island from foreign invasion.

Now, the war is over and a new generation of Kauls vies for control of Kekon's bustling capital city. They care about nothing but protecting their own, cornering the jade market, and defending the districts under their protection. Ancient tradition has little place in this rapidly changing nation.

When a powerful new drug emerges that lets anyone -- even foreigners -- wield jade, the simmering tension between the Kauls and the rival Ayt family erupts into open violence. The outcome of this clan war will determine the fate of all Green Bones -- from their grandest patriarch to the lowliest motorcycle runner on the streets -- and of Kekon itself.

3 years ago
http://Ariadne.booklikes.com Folding Paper & Spilling Ink 3.5 Jade City: Green Bone Saga #1
text Jade City: Green Bone Saga #1
This book is far more crime family drama than it is a fantasy epic. That isn't a bad thing, but it was a bit of a surprise for me. Between the slow build and the tone being different than what I expected, it took me a while to settle into the groove of this one, but once I did it was fairly enjoyabl...
See review

4 years ago
http://tannat.booklikes.com Tannat 3.5 Jade City by Fonda Lee (audiobook)
text Jade City by Fonda Lee (audiobook)
Series: The Green Bone Saga #1 I didn't really know what to expect with this one. I forget how it got on my list in the first place, but it must have made enough waves for me to notice it when it came out. I was originally planning to read the ebook, which I bought, but then the library had the au...
See review

5 years ago
http://Evaine.booklikes.com Evaine's Books, Books and More Books 4.0 Jade City by Fonda Lee - My Thoughts
text Jade City by Fonda Lee - My Thoughts
I really have to start putting my thoughts down when I finish my books, not three days later! I really enjoyed this book, more than I thought I would, if I'm honest. It's The Godfather meets Ninjas and Yakuza clans in a 1950's-ish time and on the Island of Kekon where jade is magical, giving enhanc...
See review

5 years ago
http://pagefault.booklikes.com bookaneer 4.5 Jade City
text Jade City
What a magnificent read! A rich mix of characters, political intrigue, and family drama, Jade City kept me engaged from the first page to the last. The story takes place in the city of Janloon, called "Jade City" by foreigners, and the only home of a very special form of "activated" jade that grants...
See review
see community reviews