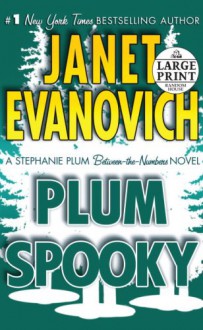 3.46 425
LARGE PRINT EDITION According to legend, the Jersey Devil prowls the Pine Barrens and soars above the treetops in the dark of night. As eerie as this might seem, there are things in the Barrens that are even more frightening and dangerous. And there are monkeys. Lots of monkeys. Wulf Grimoire... show more
LARGE PRINT EDITION

According to legend, the Jersey Devil prowls the Pine Barrens and soars above the treetops in the dark of night. As eerie as this might seem, there are things in the Barrens that are even more frightening and dangerous. And there are monkeys. Lots of monkeys.

3 years ago
http://bookjunkie57.booklikes.com bookjunkie57 4.0 Plum Spooky
text Plum Spooky
Stephanie Plum, Book 14.5 I Picked Up This Book Because: Continue the series The Characters: Stephanie Plum: Joe Manelli: Ranger: Grandma Mazur, Lula, Connie, Tank, The Story: I was starting to get underwhelmed with these between the number books but this one turned that right around. I think b...
See review

8 years ago
http://SutekoWriter.booklikes.com The best books you never read 4.5 Plum Spooky by Jaent Evanovich
text Plum Spooky by Jaent Evanovich
A fun read by Ms Evanovich. One of her novels from this series was made into a movie and I am not sure how good it was but if it was anything like this it had to be fun. In Plum Spooky we have a cast of hysterical characters and a story that mixes some paranormal with a fine mystery and procedural s...
See review

9 years ago
http://wyvernfriend.booklikes.com Wyvernfriend Reads 3.0 Plum Spooky
text Plum Spooky
While not part of the official by-the-numbers series, this is quite by the numbers reading. Stephanie is hunting Martin Munch and Diesel re-appears. To be honest I dislike Diesel's attitude to Stephanie and while some people might find the scenes where they wake up in the same bed cute, I find the...
See review

10 years ago
http://Denise.booklikes.com Denise 2.0 Plum Spooky (Stephanie Plum: Between the Numbers)
text Plum Spooky (Stephanie Plum: Between the Numbers)
This was extremely boring to me at times. The only things that really kept me reading this were Carl the monkey and the fact that Diesel is really growing on me. I don't think I would recommend this to fans of the other books of the series.
See review

11 years ago
http://shellysjournal.booklikes.com Shelly's Book Journal 3.0 Plum Spooky
text Plum Spooky
The monkey was hysterical. The rest of the story, not so much. Just seemed way too long for a between the numbers story.
See review
see community reviews