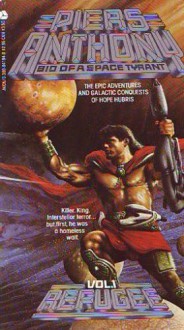 Refugee, Bio of a Space Tyrant
by: Piers Anthony (author)

This is Book One - It follows Hope and his family's flight from their home on Callisto to Jupiter. Hope's family sets out in a "space bubble" with many other refugees. The group is attacked multiple times by space pirates, and most of the adults are raped, killed, or kidnapped by the end of the story.
show less
Format: paperback
ISBN: 9780738806938 (0738806935)
Publish date: 2000-08-20
Publisher: Xlibris Corporation
Pages no: 320
Edition language: English
Category:
Fantasy, Young Adult, Adventure, Science Fiction Fantasy, Novels, Science Fiction, Literature, American, Space, Sci Fi Fantasy, Space Opera
Series: Bio of a Space Tyrant (#1)

10 years ago
http://nouveau.booklikes.com nouveau 2.0 Bio of a Space Tyrant: Volume 1 Refugee
text Bio of a Space Tyrant: Volume 1 Refugee
hmm only 2.99 on ibooks...Piers Anthony is famously called "the most read to least reviewed author" in history, and this book is case in point (as is this entry on goodreads). chock full of perverse sexuality, i think the book's sole redeeming point is that Anthony is pricing the book at less than a...
See review

10 years ago
http://davidsarkies.booklikes.com Philosophical Musings of a Book Nerd 1.5 A Rather Disturbing Book
text A Rather Disturbing Book
Well, this is the last of the Piers Anthony series that I have read, though I have recently discovered that he has added a further book to this series which I have not read (and do not plan on reading simply because I have no interest in reading any more of these stories). In a way, this series also...
See review

37 years ago
http://Amadan.booklikes.com Amadan na Briona 1.0
text
I actually liked a lot of Piers Anthony's books when I was younger. This one, however, was one of those that made me realize just what a foul, hack writer he is.One of Anthony's many flaws is his sexual hangups, and rather like Heinlein, sometimes he lets them all hang out in an ugly, ruinous way. T...
See review