In addition to writing fiction, Stout was a prominent public intellectual for decades. Stout was active in the early years of the American Civil Liberties Union and a founder of the Vanguard Press. He served as head of the Writers' War Board during World War II, became a radio celebrity through his numerous broadcasts, and was later active in promoting world federalism. He was the long-time President of the Authors Guild, during which he sought to benefit authors by lobbying for reform of the domestic and international copyright laws, and served a term as President of the Mystery Writers of America.
show less
Birth date: December 01, 1886
Died: October 27, 1975
Website: www.nerowolfe.org
Category:
Crime, Mystery & Thrillers 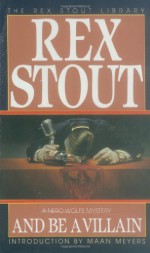 3 years ago
text PLOT IT YOURSELF by Rex Stout
Nero Wolfe is hired by a committee of authors and publishers who have been accused of plagiarism. Wolfe takes the case not now murders will follow. He also knows the one accusing the others of plagiarism is also the murderer but how to prove it and find the evidence. Not one of the best books in...
See review

4 years ago
text Where There's a Will
Where there's a will, and also Nero Wolfe, odds are there is also a body or two. It's 1938, and Nero Wolfe is short on money, so he takes a case he'd rather not: three sisters who want him to investigate the writing of a will. Their late brother promised his sisters a million dollars each, a mill...
See review

5 years ago
text The Silent Speaker
Given the number of people who've recommended the Nero Wolfe books over the years, maybe I went into this one (my first) with too high expectations. I had to push the 3-star rating, just as I had to push to keep reading this. It was boring. And dated, as well, especially regarding the female charact...
See review

6 years ago
text In the mood for some mystery
Trio for Blunt Instruments by Rex Stout draws us back into the world of Nero Wolfe and his loyal assistant, Archie Goodwin. The last time I visited with these distinguished detectives was back in 2015 (it's been too long!) so I was very happy to get a 3-in-1 with this book. This volume contains the ...
See review

6 years ago
text Black Orchids (Nero Wolfe Mysteries)
This edition actually contains two novellas, along with an introduction by Lawrence Block, a noted author of crime novels. Black orchids (the flowers) appear in both novellas, but they are otherwise unrelated, other than having in common Nero Wolfe and his able assistant, Archie Goodwin. I read this...
See review
see community reviews
Need help?