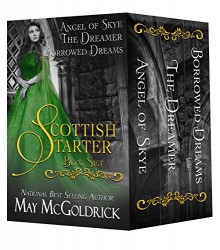 About…the Macpherson Brothers Trilogy
From the wild shores of the Scotland's Western Isles to the bloody fields of France to the glittering courts of Europe, three brothers fight for Scottish independence…and for the three women who have captured their hearts.

ANGEL OF SKYE
Fiona does not remember the years before she came to the priory on the Isle of Skye. Only the gentle Prioress knows the truth about the spirited, red-haired lass's true birth. So it is in a simple cowl and peasant's dress that she emerges from the island's mists and faces the famed warrior chief of the Highlands.

Alec Macpherson has served King James with his sword. Now he would give his very soul to protect this beautiful girl from the intrigue that swirls around her. But Fiona wants his heart as well, and willingly he gives it...even as the king's opponents are pushing her toward a deadly trap. For hidden in Fiona's memory is the face of her mother's killer and a secret that could topple the throne. And it will take Alec's Highland strengths pitted against a foe's cruel ambitions to prove, through blood and battle, which will reign—an army's might or the powerful passions of two lovers...

About…the Highland Treasure Trilogy
Three sisters each hold a clue to their family's treasure, and the English monarch will topple a kingdom to possess it. Fleeing to the deepest corners of Scotland, the Percy sisters find the will and the courage to fight for what is theirs…and in so doing unlock the hearts of three Highland warriors.

DREAMER
When her late father was branded a traitor to the king, Catherine Percy found sanctuary in Scotland. But a case of mistaken identity put her in a compromising position with the Highland earl sworn to protect her. Marriage to him saved her reputation, but nothing could save her from the stormy passion that bent her innocent body to his will…and shattered his last defense.

About…the Scottish Dream Trilogy
The three Pennington brothers, torn apart and nearly destroyed by family tragedy, each harbor a devastating secret. As they strive to restore their family and their fortune on both sides of the Atlantic, they find that three rebellious women hold the key to all they desire.

BORROWED DREAMS
Driven to undo the evil wrought by her dead husband, Millicent Wentworth must find a way to save her estate and free the innocent people he enslaves. Her only hope is a marriage—in name only—to a notorious Scottish Borderlord, the widowed Earl of Aytoun.

Devastated by the tragic accident that killed his wife and left him gravely wounded, Lyon Pennington, fourth Earl of Aytoun, is tormented by the accusations that blame him for the catastrophe. Filled with despair, he lets his mother lure him into a marriage of convenience—for the sake of a good-hearted woman on the verge of financial ruin.
Under Millicent’s gentle gaze, Lyon begins to regain his strength and his wounded heart begins to heal. And soon Millicent discovers that beneath his unruly beard and grim demeanor, Lyon just may be the most handsome—and caring—man she’s ever encountered. For the first time in her life, she realizes that s
show less
Format: Kindle Edition
ASIN: B016PFQT62
Publish date: 2015-10-14
Edition language: English

Books by May McGoldrick