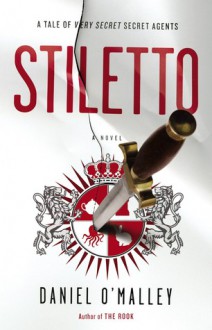 When secret organizations are forced to merge after years of enmity and bloodshed, only one person has the fearsome powers---and the bureaucratic finesse---to get the job done. Facing her greatest challenge yet, Rook Myfanwy Thomas must broker a deal between two bitter adversaries:The Checquy---the centuries-old covert British organization that protects society from supernatural threats, and...The Grafters---a centuries-old supernatural threat.

2 years ago
http://jenn.booklikes.com Murder by Death 3.5 Stiletto (Book 2 of the Checquy Files)
text Stiletto (Book 2 of the Checquy Files)
Not as good as the first, but definitely as rambling. I listened to the audio, straight from the first book, The Rook and the narrator changed. Moira Quirk does a credible job, but I listened to both too close together not to notice the difference in voices and styles and it was a bit jarring. I...
See review

4 years ago
http://JLsBibliomania.booklikes.com JL's Bibliomania 4.0 Stiletto
text Stiletto
I did finish before the end of Halloween Bingo! This novel of VERY SECRET Secret Agents starts slowly and develops into a worthy sequel to The Rook
See review

4 years ago
http://Evaine.booklikes.com Evaine's Books, Books and More Books 3.5 Stiletto by Daniel O'Malley - My Thoughts
text Stiletto by Daniel O'Malley - My Thoughts
Sad to say that I didn't enjoy Book 2 as much as I enjoyed Book 1, The Rook. I can put it down to too much infodumping and backstory and not enough story set in current times with the current action. As well as there not being enough of Myfanwy Thomas, the lead character from Book 1. The main focu...
See review

5 years ago
http://idemandjustice.booklikes.com Thoughts of a nerdy feminist 4.0 Great fun to read
text Great fun to read
I was very excited to finally get the chance to read this sequel to The Rook, which was one of the most fun books I've read in as long as I can remember. The setting's concept is not one I see often, a covert government organization consisting of people with supernatural abilities whose job is to fi...
See review

5 years ago
http://klreeher.booklikes.com fruitcakes 4.0 Stiletto
text Stiletto
not quite as much of a rip roaring romp as the first book, but very enjoyable. loved seeing more of the grafters, Odette was very charming. missed myfanwy's pov, and super wished there was more than a cameo by shantay but overall, loved it.
See review
see community reviews