Log in with Facebook
or
Wrong email address or username
Sign up
Already on BookLikes? Log in!
Incorrect verification code
Please, check your email, the code to access your BookLikes blog was sent to you already.
Enter code:
« Back Send
back to top
Search tags: Brad-Thor When I got into reading one of the first espionage series that I got into was the Scot Harvath series by Brad Thor.  Backlash is the 19th book in the series and if the bro-mance spy thriller type books are your bag, as Austin Power's would say, then "this should be in your bag, baby".

Without getting into the story, this is your typical Scot Harvath story, told by Armand Schultz.  Backlash picks up where Spymaster ends, and finds Scot in hot water in a very cold place.  The story is good, and every Scot Harvath fan should be happy when finished.

Picking up the picture, and his glass, he headed outside. The sun was almost low enough to touch the water. He wanted to watch it disappear. Then he wanted to start thinking about what he was going to do next. 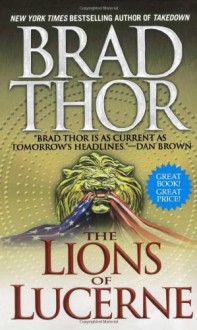 I decided to re-read one of the books that I guess you would call bro-mance books.  Spy thrillers were the All-American hero can't be slowed down or killed. Secret Service Agent Scot Harvath escapes avalanches, numerous concussions, gun battles, freezing water and saves our democracy and gets the girl in the end.

I think the only reason I like books like this was that I was brought up on Roy Rogers and John Wayne movies and this genre are just like those old westerns except modernized for today's way of life.

I won't really review it, I just wanted to get the audio-book and read along so I had to search for the best deal.  I just wished the library system I belong to had a better and bigger choice on audio-books.  I'll probably save some money and do the next book in the series, Path of the Assassin.

Lions of Lucerne by Brad Thor

I read all of Thor this summer. I've read every Silva, Baldacci, Child, and Berry (SKIP THE MUSEUM OF MYSTERIES) book, so figured I'd give Thor a try. Maybe it's because I read all of the novels in a three-month period, but I found myself skipping the buts where Thor gets up on his political bandbox. It's not that I disagree with him, but I'm in the read for the STORY, not conservative political opinion. I also discovered that he cuts and pastes some of his descriptions from one book to another—an element you might not notice unless you're gorging on Scot Harvath.

All that being written, Thor's books are entertaining and interesting. They're also geographically and culturally accurate: I've visited many of the places where his stories occur, and he's spot-on in his descriptions. I've pre-ordered his next book and am interested in seeing how much I enjoy it after a break of several months.
Like Reblog Comment
show activity (+) What an exciting little read!
It was my first time reading a book from Brad Thor, and I loved the subject matter. Who wouldn't enjoy an espionage thriller with Somali pirates? I know I did, and it also made me want to read more from the author. I even may start this series right, since this novella is #11.5 in the series, but I didn't know that when I sat to read it. I don't think it mattered anyway. I don't feel like I missed out on anything previously so it's all good. I always enjoy Brad Thor books, and since the death of Vince Flynn, he has really become my go to author for kick-ass thrillers. Scot Harvath is called upon to track down potential terrorist acts based on intelligence gathered by others. The acts could potentially be on U.S. soil, so it becomes a race against time and enemy forces as Harvath joins fellow marines he can rely on to help stop the threat. As always, these books move quickly and get right to the heart of the story. This copy is special to me also, since Mr. Thor signed it for me.