Log in with Facebook
or
Wrong email address or username
Sign up
Already on BookLikes? Log in!
Incorrect verification code
Please, check your email, the code to access your BookLikes blog was sent to you already.
Enter code:
« Back Send
back to top
Search tags: John-Dies-at-the-End 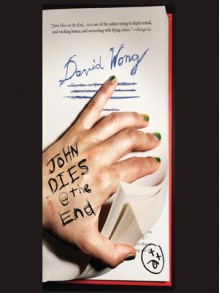 This is another selection from the Albany Public Library Summer Reading Challenge. (Theme:  "Out of this world.")

If this book were a stew, it would contain ingredients from Ghostbusters, Men in Black, Supernatural, Invasion of the Body Snatchers, and Fringe.  There were parts that made me laugh out loud, but there were also parts that just rambled, on and on.  And way too many dick jokes.

By the time the story got to its big twists near the end, I was exhausted.  I considered abandoning it, but didn't want to because then I'd have to find another "out of this world" book to replace it with. 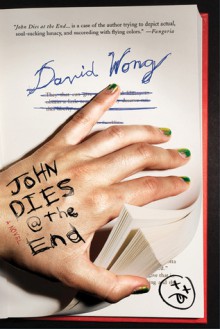 I've been side-eyeing this novel for a long time, so when a recent trip brought us to a used bookstore I picked up a copy. I usually don't for recent books still in print, but I'm glad I went on the cheap side for this one.

'John Dies at the End' is mostly David Wong telling his story to a reporter. After accidentally taking a strange drug known as 'Soy Sauce' he and his buddy John have gained notoriety for their ability to spot and intervene in supernatural problems. Wong, which is an alias for the character as well as the author, can't avoid sharing some details about his troubled youth and lots and lots of details about what a lonely, sad life he has.

The humor is juvenile, but effective. Its the language of a bro and loser who got in over their heads. The angle that the demons or whatever have an even lower, racist and homophobic, sense of humor is kind of funny. Any inconsistencies within the logic of the story is played off because of drugs, lies, and other hand-waving - which is also fine. I'm not going to read a goofy horror novel and expect internal consistency. The plot itself has no real momentum, and the book feels like the episodic piecemeal narrative the novel originated as. The real problem with the book is the female characters. There are only two substantial women in the book: 1. Jennifer Lopez who looks like J-Lo from behind and is a love interest; and 2. Amy, the younger sister of an early character, and who becomes a major character herself in the last act. There's also the dog, Molly, who arguably has a more fulfilling character arc then either woman.

All other women are either non-entity off-the-camera coworkers, party guests, victims, and girls John is having sex with - one gets a name and a brief speaking role so we can admire her breasts. Which, that's the market for this book, fine.

I've read worse, of course, Wong interjects a few paragraphs about women and how they're more than objects of desire, so he tried, I guess. The book had some entertaining absurdist moments. If I come across the sequels for less than wholesale I'll think about it.

John Dies at the End

Next: 'This Book is Full of Spiders' 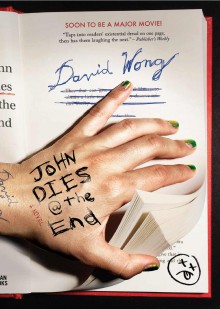 John Dies at the End by David Wong
My rating: 5 of 5 stars

(WARNING: This review doesn't actually have any spoilers, but here's a warning anyway.)

I'll be truthful - I was hesitant to read this one. I actually contemplated altogether skipping the monthly read of HA, as after scanning over some reviews I wasn't left with a great first impression. A plot that many didn't even consider a legitimate plot? Juvenile humour, including penis and... uh, toilet jokes? Suffice it to say, I was severely put off by the amount of criticism. Fortunately I bought it anyway, as I took into account the thoughts of the select few that largely share my literary tastes. They seemed to enjoy it, so surely it wasn't as bad as I thought.

Well, turned out that it was as bad as I thought, but it was also so, so good.

“Every man is blessed with his gifts from the Lord. One of mine happens to be a penis large enough that, if it had a penis of its own, my penis’s penis would be larger than your penis.”

It's hard to adequately describe this book without calling it a steaming hot mess, because that's what it was, and it didn't apologise for it. It revelled in being bizarre, ridiculously far-fetched and downright stupid, yet in amongst the rolling of my eyes, I couldn't help but laugh out loud. In fact, I chuckled so loudly that my partner enquired as to what was so funny, which resulted in me reading some passages aloud. Said partner, who is a man by the way, responded only with a reluctant nod. He simply proved that the assumption that this is a man's book is, quite frankly, inaccurate. It's entirely up to the individual, and plenty of women adored this just as much as I did, just as I'm sure plenty of men hated it.

Rife with conspiracy theories, pop culture references, outlandish ideology and crude irreverence, I thoroughly succumbed to the entertainment that was Wong's narrative. I admit, it seemed a bit odd, almost like two or three books were stuck together into one volume. It later made sense when I took the time to look into the book's origins, and how Jason Pargin ultimately created the chaotic adventures of Dave and John through webserial episodes on Cracked.com. I'm so very happy he didn't give up after the novel was initially rejected by publishers! I firmly believe the world needed this in it.

“I keep the gun in a hollowed out copy of the Koran. And there the big book was, tossed on the bed, open and gunless. Nothing else disturbed. I mean, they actually checked my Koran to see if there was a gun inside. I knew I was dealing with a sick son of a bitch.”

I didn't even entirely like Dave either; he was so very disrespectful and vulgar to nearly everyone he met - certainly an unorthodox "hero". John, whilst endearing in a man-child sort of way, was hugely self-obsessed (with his genitalia). Amy was the sole character that was truly likeable, well, that's not true. How can I forget the actual star of the show? The lady that brought just as much characterisation, if not more, than her human counterparts?

“And watch out for Molly. See if she does anything unusual. There’s something I don’t trust about the way she exploded and then came back from the dead like that.”

In conclusion: It was difficult to write this review and put into words how my brain regarded this disorganised heap of madness. Give it a try - you'll either love it or hate it.

“People die. This is the fact the world desperately hides from us from birth. Long after you find out the truth about sex and Santa Claus, this other myth endures, this one about how you’ll always get rescued at the last second and if not, your death will at least mean something and there’ll be somebody there to hold your hand and cry over you. All of society is built to prop up that lie, the whole world a big, noisy puppet show meant to distract us from the fact that at the end, you’ll die, and you’ll probably be alone.”

February sure flew past! I have to say, I had so much fun this month! There was a lot of coffee, wine, and book-related delights! I also had the chance to take part in a Q and A for Booklikes, which really made me feel warm and fuzzy inside! I know it's not that big of a deal, but it's nice to be acknowledged for something you work hard on. See my post about it here!

John Dies at the End by David Wong - It's surely becoming a regular enjoyment; taking part in the monthly group reads of Horror Aficionados! I honestly wasn't sure about this one at all - it sounded way too silly for my taste. How wrong I was! What a great start to the month!

The Devoured by Curtis M. Lawson - I was requested to read and review this one by the author. I'm glad I did, as it was a bit different than my usual reads, but in a good way. I promptly consumed it and reviewed it.

Hidden by Benedict Jacka - I started this series in 2015, whilst still in my Urban Fantasy phase. What intrigued my about it, was that it had a male protagonist, something that's not all too common in the genre. This series has never been perfect for me, but I still like to see what trouble Alex gets himself into.

The Fallen Kind Vol I: Ghosts Of Nunchi by M. Almelk - After being contacted by the lovely author, I quickly accepted his request! Post-apocalypse but on another planet? It certainly piqued my interest. I reviewed it here.

Preta's Realm by J. Thorn - A last minute read for the month. Having been on my Kindle for a long time, I decided to finally give it a shot. It was short, and it included some truly disgusting scenes.

Splatterpunk Fighting Back by MULTIPLE

A Head Full of Ghosts by Paul Tremblay

The Devoured by Curtis M. Lawson

The Awesome by Eva Darrows (2017 Review)

The Fallen Kind Vol I: Ghosts Of Nunchi by M. Almelk

I strive for two reviews a week, but I had extra space this month, so I included reviews from last year. I think I'll do that - start to post old reviews, just to have them on this blog. On Goodreads I have over a hundred reviews, dating back to 2011! This month also included a trip to Waterstones, and a basket full of books! All horror, of course.

So how did February go for you? Read anything good? Let me know! 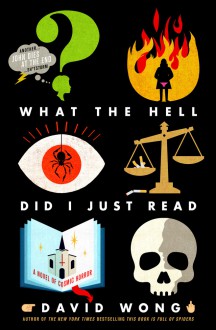 Without any explanation, here’s a picture of the first sentence: