Log in with Facebook
or
Wrong email address or username
Sign up
Already on BookLikes? Log in!
Incorrect verification code
Please, check your email, the code to access your BookLikes blog was sent to you already.
Enter code:
« Back Send
back to top
Search tags: Sandy-Williams 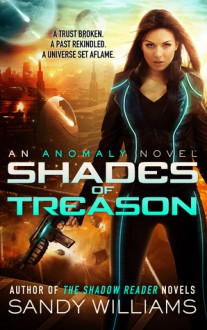 I liked Ash's attitude, but it's hard to determine if her affections for Rykus are enhanced by the loyalty training. It makes things a little weird when I can't tell if she really loves him or if she's been brainwashed a bit too much. But I like the way these two characters play off each other and I'm very much interested in how things proceed between them while they try to save the universe.

I've got the sequel on my TBR list, but I'm so aggravated with the ending that I'm gonna put it off for a little bit and read something else first.
Like Reblog Comment 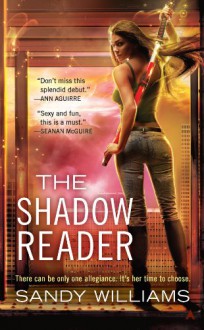 This was a great start to the series. The Shadow Reader is fast-paced and the action rarely lets up. McKenzie kicks ass and isn't one to wait around to be saved; she saves herself, most of the time.

When she's abducted by the rebels she's been helping the king of the fae fight for the last ten years, she has many uncomfortable realizations. Maybe she's fighting on the wrong side. Maybe the king isn't as good as she thinks. And maybe she's been pining after the king' Sword for ten, long, wasted years.

I enjoyed the world-building, and liked the rebels. Heck, I even liked Kyol, whose biggest fault was his unyielding loyalty to the king. The fight scenes were intense, McKenzie's confusion made her relatable, and the pages flew by; I had a hard time putting this down. I think fans of Karen Marie Moning's Fever series will find something to like here, and at only three volumes, it's not as much of a time investment. 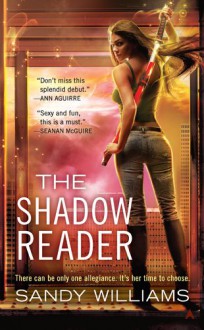 I couldn't finish this. I've moved it around and looked at it from time to time and I have no interest in trying to finish it. There's nothing to lift it out of the horde of books that have the same basic plot.

I liked it as a whole. The idea was fun and original. I didn't like the repetitiveness of the heroine throughout the story tho. She harped on the same thing over and over again. I also felt like certain details were unnecessary, and other parts had conversations that just didn't make sense. It felt like she just popped them in because they were important but it didn't flow right. However, I thought the MC was genuine and extremely caring. I also liked the side characters, they added depth. It was a pretty good first novel, hopefully the second will be better, and the heroine will grow up