Log in with Facebook
or
Wrong email address or username
Sign up
Already on BookLikes? Log in!
Incorrect verification code
Please, check your email, the code to access your BookLikes blog was sent to you already.
Enter code:
« Back Send
back to top
Search tags: age-adult 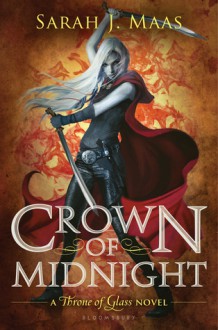 Assassin Celaena Sardothien won a brutal contest to become the King's Champion. But she is far from loyal to the crown. Though she hides her secret vigilantly, her deadly charade becomes difficult when she realizes she is not the only one seeking justice. No one is above questioning her allegiance—not the Crown Prince Dorian; not Chaol, the Captain of the Guard; not even her best friend, Nehemia, a foreign princess with a rebel heart.

Then, one terrible night, the secrets they have all been keeping lead to an unspeakable tragedy. As Celaena's world shatters, she will be forced to decide once and for all where her true loyalties lie ... and whom she is willing to fight for.


Review: I freaking loved this book even more than the first one so Celena is now the king's champion and has to kill people on his list but she cant do it so shes been faking his death now shes supposed to kill this guy named Archer who apparently is in charge of this movement against the king . Celena sees this creature in the library and is freaked out and goes to visit Elena but shes resting but the door knocker is talking his name is Mort . She is trying to figure out a way to fake Archer death so she meets with him and tells him the plan and threatens him if he screws her over .I liked chaol way more in this book he cares so much for Celena they ended up dancing on one occasion. The king is still trying to silence Nehemiah and there is a hit on Nehemiah life . Chaol and Celena have dinner and they kiss and end up sleeping together they are finally happy . Dorian has discovered he may have some magic abilities. Chaol is taken and Celena goes to get him and Archer is apart of a movement what the fuck and Nehemiah was killed by an assassin and Celena kills her killer . Celena is in mourning over Nehemiah cause they got into a fight before she died . Celena goes back into the library and finds the creature and Dorian is there also what the fuck is the king hiding . Celena opens a portal to talk to Nehemiah and it's bad news cause something comes out after she talks to Nehemiah and Dorian and Chaol come and help but she gets into the portal and Celena turns into her true form a Fae what the hell . She tells chaol that she is Fae . Chaol ends up getting the king to send her to wendolyn where there are Fae . Chaol finds out that Celena is the lost princess.

Dance with me, Celaena," he said again, his voice rough. When her eyes met his she forgot about the cold, and the moon, and the glass palace looming above them. The secret library and the king's plans and Mort and Elena faded into nothing. She took his hand and there was only the music and Chaol.

Chaol raised his brows. "So I'm just here for decoration?"

"Be grateful I consider you a worthy accessory.”

“Roland gave her a courtier’s smile. “And what sort of work do you do for my uncle?
”
Dorian shifted on his feet and Chaol went very still, but Celaena returned Roland’s smile and said, “I bury the king’s opponents where nobody will ever find them.”


Who said anything about shame?" She gestured down to her naked body, even though it was covered by the blanket. "Honestly, I'm surprised you're not strutting about, boasting to everyone. I certainly would be if I'd tumbled me.
"Does your love for yourself know no bounds?"
"Absolutely none.”


There was a poem scribbled at the top of the Ashryver family tree, as though some student had dashed it down as a reminder while studying.

Celaena Sardothien was Aelin Ashryver Galathynius, heir to the throne and righful Queen of Terrasen.”