Log in with Facebook
or
Wrong email address or username
Sign up
Already on BookLikes? Log in!
Incorrect verification code
Please, check your email, the code to access your BookLikes blog was sent to you already.
Enter code:
« Back Send
back to top
Search tags: english-language-history 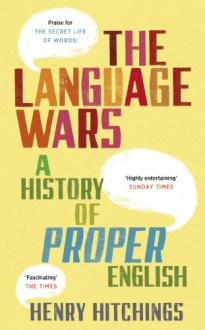 An interesting and accessible exploration of the English language and aspects of usage that people get worked up about. Hitchings approaches the subject from a broad-minded, descriptivist angle (as opposed to traditionalist/prescriptivist) and uses a variety of historical and amusing points to challenge various myths. Too many grammars ignore context in their desire to give rules that always apply.

In particular, he wants to debunk restrictive and inaccurate "rules" and embrace the evolving nature of language, without fearing that English is going to the dogs in a handcart! With the exception of religious observance, language use is perhaps the only form of behaviour where intelligent and educated people unquestioningly defer to ancient authorities. "A language is a transcript of history, not an immutable edifice" and "Novelty is not the same thing as decline". Such fears are often a proxy for wider fears of social decline ("Typically, the celebrants and defenders of proper English are celebrating and defending something else"), coupled with naive arrogance that we can do something about it. "To hanker after the very distant past... denies progress and misunderstands the essential dynamism of language" and "Much of what is now considered pure was once considered barbarous". We tend to notice changes in vocabulary more than changes in grammar, and then fall for the recency illusion (thinking it's new, when actually, it isn't).

He is keen to focus on purpose and context: "Language is form, not substance". Change is, to some extent, consensual; Ralph Waldo Emerson explained it as "Language is a city to the building of which every human has bought a stone" and Chomsky listed 5 purposes: transmitting information, establishing relationships, expressing/clarifying thoughts, pursuing knowledge and understanding, exercising the mind creatively, and play. Hitchings is also keen not to denigrate accents and dialects, pointing out that few people choose theirs and that non standard is not the same as substandard. This raises the question of what accent to teach second language learners? RP is spoken by a minority, but is understood by almost all, so that is understandably the default.

English nouns don't have a gender, but gender still causes linguistic issues: singular they/their, anyone? Most Brits are happy with those, but many Americans are not. In fact, in 1850, an act of Parliament decreed the use of masculine pronouns in legislation for simplicity. Few would advocate that now but "The inherent problem with political correctness was, and is, that it seeks to extend people's rights while at the same time curbing their freedoms. Instead of fostering respect for variety... it stresses differences... reforming language in the interests of equality is not the same as accomplishing equality."

There is an interesting section on "the plasticity of tenses", i.e. how they are not always used according to their name. For example, "Actor dies" is arguably more tactful than "Actor is dead", and although grammatically present tense, we know that he isn't still dying. "You will insist on criticising my driving" is grammatically future, but describing something that has happened repeatedly in the past. "Hydrogen pops", is grammatically present, but applies across time, to something that always happens. "I am going to the beach tomorrow" uses the present tense to indicate a future event.

Hitchings also ponders the effects of modern technology. "The selective process of listening is losing ground to hearing... the concept of a private mind is becoming less stable; increasingly we participate in the function of a collective mind, borrowing other people's subjectivity." In a related vein, Naomi Baron identified "the end of anticipation" because we post our news online so often, there is not much to say when we meet up. Being "always on" reduces our opportunity to be reflective.

It has an index and VERY detailed notes and references for each chapter, but there wasn't much that I hadn't come across before in some form or other. I think David Crystal's "The Fight for English: How Language Pundits Ate, Shot, and Left" (http://www.goodreads.com/review/show/80173379) is probably a better read, though the notes are not quite as detailed.

Nevertheless, I enjoyed reading it and ended up with a better understanding of some of the issues than I had before.

* If you can't split infinitives in English because in Latin they are single words and hence unsplittable, neither should you be able to split a nominative in English, such as "a clever girl" and "the broken threads".

* Dryden was passionately against ending with a preposition, partly because of the etymology of "PREposition" and also because he judged the purity of English by how easy it was to translate into Latin and back again. After his epiphany, he revised may of his works to remove terminal prepositions.

* Using "literally" in a non-literal way has a long and illustrious history, including "The land literally flowed with milk and honey" (“Little Women”) and "He "literally feasted his eyes, in silence, on the culprit" (“Nicholas Nickleby”).

* Using "hopefully" as a sentence adverb is referring to the attitude of the speaker, not the subject; one more reason not to object to it.

* Schizoglossia is anxiety about using language appropriate for the occasion: context is all. Like Charles V who allegedly spoke Italian to women, French to men, Spanish to God and German to his horse!

* Redundancy is everywhere: overhearing 3/10 of the words in a conversation is enough to get the gist.

* Hyphens are used to link AND to separate, yet they are neither spelling nor punctuation - and there is no authority that can define specific rules for their use, it is so variable.

* Spelling: only about 3% of words are genuinely anomalous and 84% are obviously regular. With 40-44 distinct sounds to express in 26 letters (3 of which are redundant: c, q, x), that's not bad, especially as the most common vowel, schwa, doesn't have a letter.

* Spelling reform is only viable if universal, which means it would not reflect the pronunciation of many users; the current system is relatively flexible.

* Johnson's was arguably not the first English dictionary, but its predecessors were more like glossaries of difficult words. He compiled from what he found in books, rather than starting with a word list. That had an inherent bias to words meaning what people used them to mean.

* Johnson started off with the intention of embalming the language but came to realise its necessary mutability.

* The long list of words whose meaning has changed includes ones that have changed from neutrally descriptive to more judgemental: a villain was a simple-minded yokel, beggar was not pejorative, vulgar meant ordinary, rascal was just the lowest social class, ignoble merely the opposite of noble and wretch meant exile.

* Webster's motivation was overtly political, "As an independent nation, our honour requires us to have a system of our own, in language as well as government. Great Britain should no longer be OUR standard; for the taste of her writers is already corrupted, and her language on the decline".

* It's easier to mask your religion than your language and pronunciation, e.g. Judges re the origin of "shibboleth".

* A Victorian maxim was "Servants talk about people; gentlefolk discuss things". Perhaps they should have added something about interesting people discussing ideas?

* In the 19th century, the number of English speakers quintoupled from 26m to 126m.

* The number of languages in the world is diminishing, but arguably, the number of Englishes is increasing.

* Prescriptivists often do more PROscribing than PREscribing, with a "belief that the avoidance of mistakes is more important than the achievement of excellence".

* Proscriptivists "hand down their judgements in the name of science, but their message is unscientific and their efforts originate not in the rigour of research and philosophy but in a sense of lief's encroaching chaos and myriad uncertainty".

* Avoiding passives is a popular mantra, but Orwell's oft-cited "Politics and the English Language" (which advises against them) opens with a passive ("It is generally assumed") and one fifth of its sentences are passive. He wasn't making a blanket rule: he was specifically discussing how language can be used to persuade and dissemble, rather than making suggestions for other types of writing.

* Euphemisms are powerful: sometimes innocuous ways of avoiding what we don't want to think about ("going to the bathroom"), but at other times, they are ways of sanitising the truth ("extraordinary rendition", "ethnic cleansing").

* There is a book called "100 Words Almost Everyone Mispronounces", but if almost everyone does so, in what sense are they wrong?

* Beware of the etymological fallacy: if "decimate" still means destroy one tenth, then "candidate" should mean dressed in white, "meticulous" beset by fears and "sycophant" someone who finds figs!

If English is your mother tongue then you need to know where that which spills from your mouth originates and there is no finer way of getting the facts than with these lectures. I had a slight problem with Lerer's voice but for the most one can distract from this due to the excellence of content
More posts
Your Dashboard view:
All Reviews Text Photo Quote Video URL Activities
Liked posts Top Tags
Press About Terms of Services Privacy Policy Contact Us Blog FAQ Patronaty medialne BookLikes for Authors Partners panel more...
Team Themes Docs API Blogs
Copyright © 2020 BookLikes