Log in with Facebook
or
Wrong email address or username
Sign up
Already on BookLikes? Log in!
Incorrect verification code
Please, check your email, the code to access your BookLikes blog was sent to you already.
Enter code:
« Back Send
back to top
Search tags: fleming 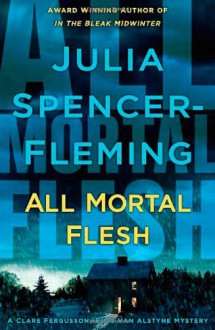 I've literally just finished this and I'm blown away by what Julia Spencer-Fleming is willing to put her characters through. This was an edge-of-the-seat -how-can-THIS-have-gotten-worse sort of book.

I'll do a review when I've had time to take a breath but first I'm going to buy the next book in the series.

Moonlight Reader told me this was going to be a hell of a ride and she was right. There’s so much grief in this and it feels like real grief, not the romantic kind, it summons up memories of feeling that way. This isn’t a book I could read in public. People would be wondering what was upsetting me.

and it’s just slipped hem into my imagination the way a cat will  hook your flesh if you show it too much trust.

This is book five in this crime series about a woman priest and the Chief of Police of a small town of Millers Kill in the Adirondack Mountains in New York. The two of them keep being thrown together as they try to sort out various violent deaths in the town.

Book by book, the attraction between them has grown, fed partly by denial and mostly by a common urge to act and to protect.

...the Police Chief is married. To a very nice, very attractive woman (it annoys me a little that it matters whether she's attractive - it shouldn't pile on the angst - she's his wife - that should be enough) that he dragged to this small town when he retired from the Army and whom he has not been able to have children with. And who he still loves.

...the Priest is deeply committed to her faith and her parish and knows that she can't honour those things AND keep feeding her attraction to the Police Chief.

By the violent and traumatic end of book four, both of them have realised that, although they haven't had sex, they have had an affair in their hearts, with all the betrayals that that involves.

I'd wondered how the fifth book would cope with this. I had expected another mystery during which the two of them would go through the slow torture of deciding what to do, even though there are no good choices but Julia Spencer-Fleming is braver than me and she's given the fifth book an explosive start:

I'll be back for me tomorrow.