Log in with Facebook
or
Wrong email address or username
Sign up
Already on BookLikes? Log in!
Incorrect verification code
Please, check your email, the code to access your BookLikes blog was sent to you already.
Enter code:
« Back Send
back to top
Search tags: joe-r-lansdale Lansdale it is! Thanks to those who voted! 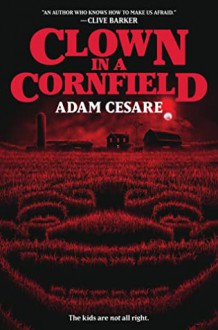 I finished my book for space 98:

Title starts with any of the letters in LADDERS

So now, Booklikers: You get to choose my next read!

(I don't have the time today to do a real online poll, please just enter the title of your vote in the comments. I'll tally it up at noon tomorrow!)

GIVE US THAT OLD-TIME RELIGION

About fifteen miles west of Stauford, Kentucky lies Devil’s Creek. According to local legend, there used to be a church out there, home to the Lord’s Church of Holy Voices—a death cult where Jacob Masters preached the gospel of a nameless god.

And like most legends, there’s truth buried among the roots and bones.

In 1983, the church burned to the ground following a mass suicide. Among the survivors were Jacob’s six children and their grandparents, who banded together to defy their former minister. Dubbed the “Stauford Six,” these children grew up amid scrutiny and ridicule, but their infamy has faded over the last thirty years.

Now their ordeal is all but forgotten, and Jacob Masters is nothing more than a scary story told around campfires.

For Jack Tremly, one of the Six, memories of that fateful night have fueled a successful art career—and a lifetime of nightmares. When his grandmother Imogene dies, Jack returns to Stauford to settle her estate. What he finds waiting for him are secrets Imogene kept in his youth, secrets about his father and the church. Secrets that can no longer stay buried.

The roots of Jacob’s buried god run deep, and within the heart of Devil’s Creek, something is beginning to stir…

Quinn Maybrook just wants to make it until graduation. She might not make it to morning.

Quinn and her father moved to tiny, boring Kettle Springs to find a fresh start. But ever since the Baypen Corn Syrup Factory shut down, Kettle Springs has cracked in half. On one side are the adults, who are desperate to make Kettle Springs great again, and on the other are the kids, who want to have fun, make prank videos, and get out of Kettle Springs as quick as they can.

Kettle Springs is caught in a battle between old and new, tradition and progress. It’s a fight that looks like it will destroy the town. Until Frendo, the Baypen mascot, a creepy clown in a pork-pie hat, goes homicidal and decides that the only way for Kettle Springs to grow back is to cull the rotten crop of kids who live there now.

From the Edgar Award-winning author of the Hap and Leonard series, a hard-boiled novel set in 1960s Texas in which a no-nonsense car salesman faces a tempting decision, a dangerous deal, and an alluring affair.
Ed Edwards is in the used car business, a business built on adjusted odometers, extra-fine print, and the belief that "buyers better beware." Burdened by an aging, alcoholic mother constantly on his case to do something worthier of his lighter skin tone and dreaming of a brighter future for himself and his plucky little sister, Ed is ready to get out of the game.
When Dave, his lazy, grease-stained boss at the eponymous dealership Smiling Dave's sends him to repossess a Cadillac, Ed finally gets the chance to escape his miserable life.
The Cadillac in question was purchased by Frank Craig and his beautiful wife Nancy, owners of a local drive-in and pet cemetery. Fed up with her deadbeat husband and with unfulfilled desires of her own, Nancy suggests to Ed -- in the throes of their salacious affair -- that they kill Frank and claim his insurance policy. It is a tantalizing offer: the girl, the car, and not one, but two businesses. Ed could finally say goodbye to Smiling Dave's, and maybe even send his sister to college. But does he have what it takes to see the plan through?
Told with Joe Lansdale's trademark grit, wit, and dark humor, More Better Deals is a gripping tale of the strange characters and odd dealings that define 1960s East Texas.
4.

"They're just kids ... It's only a game." That's what Barbara, a lovely twenty-year-old babysitter told herself when she awoke bound and gagged. But the knots were tight and painful and the children would not let her go.

"They're just kids ... It's only a game," she told herself again. But the terror was real ... and deadly!
In the decades since its original publication, Mendal W. Johnson's bestseller Let's Go Play at the Adams' (1974) has gained a reputation as one of the most harrowing horror novels ever written, and copies have long been unobtainable except at exorbitant prices. This edition reproduces the original paperback cover art and features a new introduction by Grady Hendrix (Paperbacks from Hell), in which details about this cult masterpiece's enigmatic author are revealed for the first time.
I look forward to whichever book you guys choose!
Like Reblog Comment
show activity (+) Hap and Leonard are among my favorite fictional characters and I'm always excited to be reunited with them. Of Mice and Minestrone is fun and enlightening, especially if you're like me and wanted to know a bit more of Hap and Leonard's history.

The first few stories are from Hap's point of view and they added to my perspective of him. It seems that he was born with his sense of right and wrong. His parents are barely mentioned but they must have had a big impact on his life, because by his teen years he had a clear sense of what was justice and what wasn't. I enjoyed watching him put his beliefs into action, even when the end result wasn't what he expected.

The high points for me in this collection were two-fold-the first being THE SABINE WAS HIGH. We join with Hap as he picks up Leonard, fresh back from combat in Vietnam. I loved this story so much, because at its heart is a friendship between two people that shouldn't even be speaking to each other at that time in history, never mind being best friends. With Hap being a Vietnam War protester, and having gone to prison for his beliefs, everything we've ever been told about Texas, the South in general, about war protesters and war veterans, between straights and gays, all of it goes out the window. There is a true love there, transcending all the labels and ugly things, and that love is beautiful.

SPARRING PARTNER was the other standout tale for me. Both Hap and Leonard had experience boxing early on-just working out, and with Hap learning some martial arts moves. Here, though, the outside world learns a lot about the skills both of them possess. Filled with the humor and dialog that I have grown to love over the years, this story once again brought home Hap and Leonard's unique sense of justice.

There are 6 tales here, but the last one features Kasey Lansdale and some recipes for the foods eaten throughout this volume.  Even the recipes are funny, "beat it like you're running from the police", (not an exact quote as I'm not allowed to quote directly from the book with an ARC), but you get the idea. It's not everyone that can make recipes funny.

I originally rated this 4 stars, but thinking about it overnight-I decided to change it to 5. I didn't think about the corona virus at all when reading this, and I read it over two days, but could easily have done it in one. I wanted to savor the experience. I think you should too! The only caveat to that would be that I recommend you reading the Hap and Leonard series in order. If you do, these tales will be that much more meaningful-providing insights into the lifelong friendship of Hap and Leonard.

Available May 28th 2020, but you can pre-order here: OF MICE AND MINESTRONE

*Thank you to Tachyon Publications and NetGalley for providing an e-ARC in exchange for my honest feedback. This is it! A story about being poor, angry but not yet broken that manages to be honest, empathetic and hopeful without being patronising or too-soft-focus-to-be-true.

"Fender Lizards" was my first Joe Lansdale novel which, I'm glad to say, means I have a new author to devour in the coming months.

Joe Lansdale packed a lot in to the 232 pages of this novel: what it's like being poor enough to be living in a trailer in East Texas with your whole family; how to handle living your life angry, what family really means, how to take joy in being strong and swift, the limitations of solving your problems by taking a piece of 2x4 upside someone's head and how to take on a Carnival roller derby team called the Karnie Killers.

"Fender Lizards" is about Dot Sherman, a seventeen-year-old girl, who lives with her mother, grandmother and baby brother in a trailer in East Texas, works six-hour shifts at the "Dairy Bob" as a "Fender Lizard" (a waitress on roller skates serving food to folks in their cars) and who is kinda sorta thinking about taking her GED ( Good Enough Diploma).

Dot recounts her story directly to the reader and she doesn't hold back any on her thoughts or her feelings. She's angry and sassy but too honest with herself to blame other people for her problems. She does what's in front of her and she speaks her mind. I found myself believing in her, liking her and wishing her well.

Dot isn't a Disney character and this isn't a Hallmark movie. Dot isn't averse to a little violence, especially when confronting her sister's abusive boyfriend. She finds it hard to trust men, which show how well she learns from experience, and she won't take crap from anyone, especially her turned-up-out-of-the-blue-never-heard-of-him-before uncle or her went-out-for-cigarettes-and-never-came-back dad.

This is a remarkably cliché-free book that feels real if allow for a little luck, a little optimism and a lot of spirit from Dot and the people around her.

It's filled with humour, most of it from the dialogue but some of it from the slightly bizarre situations (there's a Court scene that could only happen in East Texas. The pace works and there are some wonderful action pieces with the roller derby towards the end of the book.

There's no happily-ever-after ending where everything's tied up with a neat bow but the ending is believable, hopeful and left me with a smile on my face.

The audiobook is narrated by Kasey Lansdale, Joe Lansdale's daughter. I think she did a great job and I recommend listening to the audiobook version.

This is addictive. Feels real rather than hokey. Dot has spirit but also doesn't lie to herself about her actions or her situation. And now it looks like there's gonna be Roller Derby.

'course, my entire understanding of Roller Derby comes from watching Ellen Paige in Drew Barrymore's "Whip It". But the movies wouldn't lie to me, would they? Anyway, I'd love Drew Barrymore to make "Fender Lizards" into a movie.