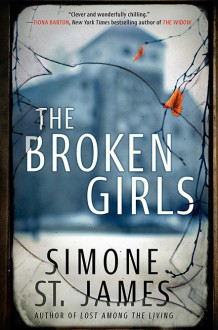 Vermont, 1950. There’s a place for the girls whom no one wants—the troublemakers, the illegitimate, the too smart for their own good. It’s called Idlewild Hall. And in the small town where it’s located, there are rumors that the boarding school is haunted. Four roommates bond over their whispered fears, their budding friendship blossoming—until one of them mysteriously disappears. . . .

Vermont, 2014. As much as she’s tried, journalist Fiona Sheridan cannot stop revisiting the events surrounding her older sister’s death. Twenty years ago, her body was found lying in the overgrown fields near the ruins of Idlewild Hall. And though her sister’s boyfriend was tried and convicted of murder, Fiona can’t shake the suspicion that something was never right about the case.

When Fiona discovers that Idlewild Hall is being restored by an anonymous benefactor, she decides to write a story about it. But a shocking discovery during the renovations will link the loss of her sister to secrets that were meant to stay hidden in the past—and a voice that won’t be silenced. . . .
show less
Format: hardcover
ISBN: 9780451476203 (0451476204)
Publish date: 2018-03-20
Publisher: Berkley
Pages no: 336
Edition language: English

2 years ago
http://BrokenTune.booklikes.com BrokenTune 1.0 The Broken Girls
text The Broken Girls
I'm so bored.It reads like YA. Also, I've lost which story line I am supposed to be interested in. Bugger this. I'm out. DNF @ 57%
See review

3 years ago
http://jonrecluse.booklikes.com Reclusive Reads 5.0 The Broken Girls by Simone St. James
text The Broken Girls by Simone St. James
An excellent murder mystery/ghost story centered around the ruins of a former school for unwanted girls known as Idlewild Hall. The mystery is engaging, moving between the 1950s and the present, and the ghost story has a marvelously creepy urban legend vibe.Highly recommended.
See review

3 years ago
http://divinesai.booklikes.com Sai Marie's Sultry Stanzas 5.0 BEST BOOK IVE READ IN AGES!!
text BEST BOOK IVE READ IN AGES!!
I loved this book - St. James set this tale in the perfect location, and it is both mysterious and horrifying. It is probably something I would imagine would one day become a film because it is up there with "Kiss the Girls," as far as contemporary suspense goes. The story does flash a bit back to o...
See review

3 years ago
http://sunsetxcocktail.booklikes.com sunsetxcocktail 3.5 Review: The Broken Girls
text Review: The Broken Girls
I received a copy from Netgalley. I love boarding school mysteries. Especially ones where there is a mix of past and present. The mystery of this one was what caught my interest in the synopsis. A journalist who can’t get over the murder of her older sister at an exclusive boarding school is still...
See review
see community reviews