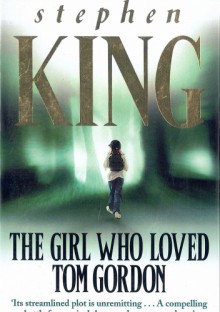 Trisha has only veered off the trail to get away from the bickering of her brother and recently divorced mother. She doesn't think there's any chance of getting lost.

Except in her panic to get back on the path, Trisha takes a turning that leads into the tangled undergrowth. Deeper and deeper in the terrifying woods. At first it's just the bugs, midges and mosquitoes. Then the hunger. For solace she turns her Walkman into the broadcasts of the Red Sox baseball games and the performance of her hero Tom Gordon. And when the reception begins to fade, Trisha imagines that Tom Gordon is with her.

As darkness begins to fall, Trisha begins to give up hope of being found. Alive. And as she struggles for survival and a way out, she realises that she's not alone. There's something else in the woods - watching. Waiting...

3 years ago
http://SheriC.booklikes.com Portable Magic 5.0 The Girl Who Loved Tom Gordon ★★★★★
text The Girl Who Loved Tom Gordon ★★★★★
This was a re-read (or re-listen) of a favorite old book. Rather than go into details, I'd urge you to read the excellent reviews by Chris' Fish Place and Mike Finn, both of whom were more eloquent than I could hope to be. This is one of King's books that is more character exploration than horror no...
See review

5 years ago
http://ethiercn.booklikes.com Chris' Fish Place 4.0 Woods Square
text Woods Square
Lately, I've been applying the Bechdel test to books. It's actually quite sad how many of them fail. From a techincal standpoint, this book fails as well. But like Gravity, it is a story about survival with other characters making only brief appearances.Trisha is a young girl whose parents are divor...
See review