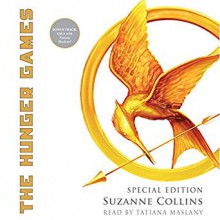 Sixteen-year-old Katniss Everdeen regards it as a death sentence when she steps forward to take her sister's place in the Games. But Katniss has been close to dead before-- and survival, for her, is second nature. Without really meaning to, she becomes a contender. But if she is to win, she will have to start making choices that weigh survival against humanity and life against love.
show less
Format: audiobook
ASIN: B07HHJ7669
Publish date: 2018-10-30
Publisher: Scholastic Audio
Minutes: 635
Edition language: English
Category:
Fantasy, Young Adult, Adventure, Science Fiction, Romance, Action, Dystopia
Series: The Hunger Games (#1)

8 months ago
http://ina1811.booklikes.com Ivana - Diary Of Difference 5.0 The Hunger Games
text The Hunger Games
Blog | Facebook | Twitter | Instagram | Pinterest #1 The Hunger Games - ★★★★★I am probably the last person posting a book review for The Hunger Games by Suzanne Collins.When the book came out, the movie followed shortly after. In that time, I decided to watch the movie rather than reading the book. ...
See review

1 year ago
http://readingismyescape.booklikes.com Reading is my ESCAPE from Reality! 5.0 The Hunger Games (Special Edition) - audiobook
text The Hunger Games (Special Edition) - audiobook
Audience: Young Adult Format: Audiobook Library Copy When I wake up, the other side of the bed is cold. - first sentence This is a re-read for me. I watched the movies during a marathon over the holiday break and was inspired to read the books again. This time I decided to go with the audiob...
See review

3 years ago
http://danae.booklikes.com danae 5.0 "The Hunger Games" by Suzanne Collins
text "The Hunger Games" by Suzanne Collins
I love every part of this book. There's never a dull moment.I love the characters (yes, I cry when Rue dies, the strategy aspect of the book (the outfits Cinna and Portia design, the way Haymitch and Katniss communicate during the Games, how Katniss performs for the cameras in order to encourage spo...
See review

3 years ago
http://tatenoblee.booklikes.com Tate's Book Review 4.0 The Hunger Games Book Review
text The Hunger Games Book Review
"The hunger games" by Suzanne Collins is a thrilling book about a girl named Katniss Everdeen who lives in a futuristic world. In this world, she lives in a country with 12 districts. Each one focuses on a different aspect. For example, Katniss's district is a coal mining district that is very poor....
See review
see community reviews